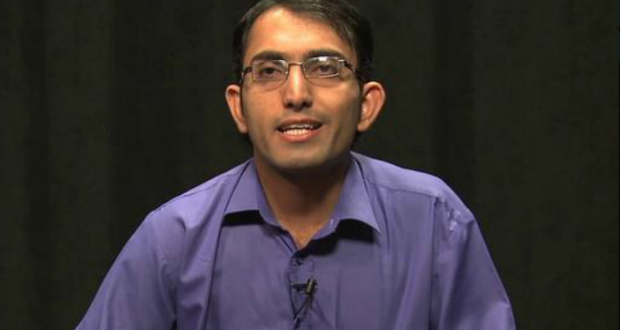 Malik Siraj Akbar chose exile over death. He lived to tell the story of resistance, a freedom movement and the fight for democracy in Balochistan. Geographically, Balochistan may be part of Pakistan but in its heart it is an independent nation, one that never accepted the Islamic Republic’s forceful annexation in 1948.

Akbar started his journalistic career in 2006 at 23 as a bureau chief for Pakistan’s national newspaper, the Daily Times. While writing for major national and international newspapers, he faced constant harassment from the Pakistani authorities, which eventually prompted him to seek asylum in the U.S. in 2010, where he was taking part in the Hubert H. Humphrey Fellowship Program.

To describe the changing dynamics of the Baloch national movement, which already has a history of more than five decades, Akbar recently wrote a book, The Redefined Dimensions of Baloch Nationalist Movement, in which he narrates how the movement for an independent Balochistan has percolated to each and every section of the society, with even the educated middle class, once aloof from this struggle, becoming a vocal votary of the freedom movement.

Now 30, Akbar epitomizes the Islamic Republic’s widening fault-line and its failure to sustain the idea of Pakistan, as radical Islam and rabid religiosity push the country to a precipice. The Diplomat’s Sanjay Kumar recently spoke with the author.

How do you identify yourself: a Baloch or Pakistani? What is the reason for identifying or describing your identity the way you do?

I am asked this question almost every single day. Both sides – the Balochs and the Pakistanis – ask me the same question with a set of expectations. Considering the nature of my work, I prefer to identify myself as an independent journalist. Yet I am frequently asked whether I am a “Baloch journalist” or a “Pakistani” journalist. I do not wish to restrict my constituency of readers by identifying myself on ethnic, religious or geographic lines. It is unfortunate that most journalists currently working in Balochistan are asked the same question. Gone are the days when journalists could work independently without necessarily belonging to one or the other side.

In your book The Redefined Dimensions of Baloch Nationalist Movement you talk about the last decade of the Baloch national movement, and what it aims to achieve.

As stated in its title, the book highlights the “new dimensions” of the Baloch nationalist movement. In the past, the Baloch nationalists only asked for administrative and financial autonomy while remaining within the federation of Pakistan. That demand has significantly changed in the past decade. Now, it has transformed into a demand for Balochistan’s absolute independence from Pakistan. Unlike the past anti-Pakistan movements initiated in Pakistan, the current Baloch movement is headed by educated young people from middle-class families. Women and children also actively participate in peaceful protest rallies in support of a free Balochistan. Pakistan has applied all possible repressive tactics to quell the Baloch uprising.

Every now and then you hear a missing person story from Balochistan. Why do people go missing, and how serious is the alienation issue?

Pakistan’s secret service, the Inter-Services Intelligence and Frontier Corps, a federal paramilitary force, are believed to be behind the cases of enforced disappearances in Balochistan.

Thousands of Baloch people have disappeared since the conflict began in 2004, while hundreds have resurfaced as bullet-riddled corpses in what is known locally as Pakistan’s “kill and dump” operations in Balochistan. The disappeared include people from almost all walks of life. Most of them are young students and political activists between the ages of 18 to 24. A few lucky among the missing persons who are released have reported about undergoing severe torture during official custody.

The missing persons’ issue has significantly contributed to Baloch anger.

Are you also one of the missing persons from your motherland? Why would a bright, promising person such as yourself have to seek asylum in the U.S.?

What is the biggest threat in your province – Islamization of the province or militarization – and how so?

Militarization is the biggest threat Balochistan faces. Islamization is just a byproduct of the Pakistani army and its intelligence agencies. Balochistan is a very secular society where we, until recently, never worried about things like Islamization. In recent years, the Pakistani secret services have injected radical Islam to counter Baloch nationalists. Those who receive support from the Pakistani military establishment include the Taliban, the Lashkar-e-Jhangvi and the pro-Taliban Jamiat Ulema-e-Islam.

A reason why the militarization of Balochistan worries me is the absence of the Baloch in Pakistan’s security establishment. So, militarization aside, everyone in the military, secret services and paramilitary forces who is appointed in Balochistan actually belongs to another province. They are outsiders. They do not speak the Balochi language nor do they know the local culture and traditions. With no stakes involved, they indulge in massive human rights abuses and promote radical Islam in order to Islamize the secular Baloch society.

You describe the killing of the Baloch nationalist leader, Nawab Mohammad Akbar Khan Bugti, as Balochistan’s 9/11. Why? How has that incident complicated the reconciliation process with Pakistan?

Nawab Bugti was a moderate Baloch leader who had worked with Pakistan throughout his life. He was not a separatist. He had actually served as a former governor and chief minister of the province. During the last days of his life, he was also engaged in talks with Islamabad on critical issues like gas royalty and construction of military cantonments in Balochistan.

With the killing of Bugti, Balochistan was left with no leader with whom Islamabad could negotiate. His killing created a vacuum for dialogue and transformed the Baloch demand for provincial autonomy into a quest for outright independence. When you kill a moderate leader, you just pave the way for hardliners and that is what has happened in Balochistan. A moderate negotiator like Bugti has been replaced by educated, middle-class young men who no longer want to reconcile with Pakistan.

You started the first online English newspaper for Balochistan, The Baloch Hal. Why did you feel the need to start a newspaper?

There is very limited coverage of Balochistan in the Pakistani media. Even most Pakistanis do not know much about Balochistan. The mainstream newspapers, with which I had the opportunity to work, deliberately censor stories regarding Balochistan. Rarely are issues pertaining to the province given space on the editorial pages. Also, foreign journalists are denied entry inside Balochistan. So I launched The Baloch Hal as a window for the rest of the country as well as for the world. We focused on hyper-local stories and provided insights about them.

The work of The Baloch Hal was immediately recognized and appreciated in the international media. Even the BBC World Service praised our work. The Pakistani government, for its part, thought The Baloch Hal, with its reporting on human rights issues, was embarrassing the military. As a result, the Pakistani Telecommunication Authority (P.T.A.), blocked us in 2010. For the past three years, The Baloch Hal has remained banned inside Pakistan. Although several national and international groups such as the Committee to Protect Journalists, Bytes for All and The News International have mentioned the ban on our newspaper, successive Pakistani governments have not agreed to lift it.

Some analysts say that Balochistan is going to be Pakistan’s next Bangladesh. Is the idea of Balochistan more important for you or the idea of Pakistan? Can both ideas coalesce or coexist?

I don’t think Balochistan is going to be the next Bangladesh. Unfortunately, this fact also boosts the Pakistani government’s confidence level because they know that they can continue with their human rights abuses in Balochistan and the Balochs have no choice but to tolerate the state repression.

Unlike the Bengalis, the Baloch do not have international support. There is not a single country yet that supports the idea of a free Balochistan. Pakistan gets substantial military assistance from the United States to fight the war on terror and portions of that assistance are diverted to carry out military operations against the Baloch. The U.S. government, despite repeated reminders by groups like the Amnesty International, does not hold Pakistan accountable for the misuse of American aid.

I think the idea of Pakistan is deeply flawed. Besides the Baloch, almost everyone else in Pakistan, such as the Shia Muslims, the Hindus, the Christians and other ethnic minorities, has a problem with the idea of Pakistan. If countries can amend their constitutions, I do not understand why Pakistan cannot revisit its fundamental idea. A country, such as Pakistan, that calls itself the “land of pure” and that expects citizens to abide by the teachings of Islam and treat India, the United States, Israel as perpetual enemies cannot give its people a sense of nationhood.

India is often blamed for stoking insurgency in your province. To what extent is this true?

The Pakistani government has blamed India, the U.S. and Israel on so many occasions for domestic failures that even ordinary citizens have stopped buying that official claim anymore. Balochistan is Pakistan’s original sin and Pakistan has to admit its policy blunders. Pakistan and India love to “expose” each other on almost every occasion. I am sure Pakistan would not miss an opportunity to embarrass India if it had genuine proof of New Delhi’s involvement in Balochistan. The Baloch movement is absolutely indigenous and existed even during times when India and Pakistan sought peace. If Balochistan enjoyed Indian support, the Baloch would not receive the bullet-riddled corpses of their youths every single day. They would surely have followed the Bangladesh model much earlier. (Courtesy: The Diplomat)

Republished in The Balochistan Point on August 3, 2013

2013-08-03
admin
Previous: Missing person case: Missing persons issue will not be resolved through task force: Chief Justice
Next: Gwadar, China And The Unrest