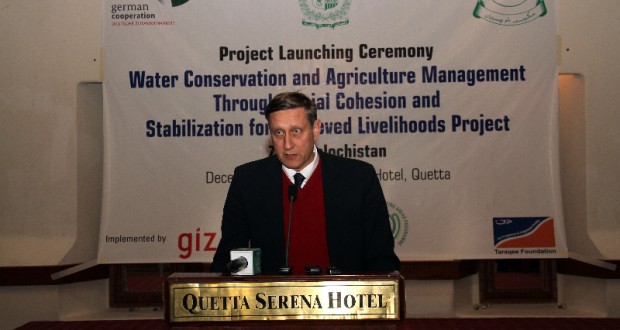 Balochistan Is The Key To The Stability Of The Pak-Afghan Region: German Ambassador

QUETTA: The German Ambassador to Pakistan, Dr. Cyril Nun has said Balochistan is the key location to concentrate for the development and stability of the Pak-Afghan region.

“Germany is the biggest trading partner of Pakistan in European Union and providing assistance in education and health sector to Pakistan,” he was addressing the launching Ceremony of “Water Conservation and Agriculture Management through Social Cohesion and Stabilization for Improved Livelihoods”, organized by Taraqee Foundation at a local hotel in Quetta.

The total duration of the project is 12 months which would be completed by October 30, 2015.

Dr. Cyril Nun said Germany is the biggest trading partner of Pakistan in European Union and providing assistance in education and health sector to Pakistan. “In development of Balochistan province, Germany is financing projects under RAHA programme to especially focus the host and refugee population in Balochistan,” he added.

German envoy said Balochistan is not a forgotten province, Germany has supported development in Balochistan in the past and we will continue our support to the deprived communities of the province. He reassured German support for the development of Balochistan.

He said there is an immense scope of work in Balochistan that is yet to be undertaken. He also highlighted the issues which are key bottlenecks to the development of the Province and the impacts on the host communities in Balochistan due to huge influx and long stay of Afghan refugees for around 35 years.

He said, Balochistan is the largest province of Pakistan according to area with minimum population in comparison to the other provinces and yet the least developed. He added, this also indicates more resources and support from national and international entities to contribute to the development of Balochistan Province.

He urged the German government to continue their support and reiterated that such initiatives will help the deprived communities in Balochistan.

Mr. Abdul Rahim Ziaratwal Minister for Law and Parliamentary Affairs, Information and IT Balochistan Province, shared his views about the deprivation of the Balochistan Province. He stressed on implementation of development initiatives to cater the dire needs of the host and refugee population coexisting in the province. He appreciated the efforts of Taraqee Foundation, GIZ and the German Federal Foreign Office for their efforts to overcome the long-lasting development issues and urged them to continue their efforts in this regard.

Published in The Balochistan Point on December 20, 2014

2014-12-20
Editor
Previous: Development Work Has Paralyzed In Balochistan Due To Disagreement On Appoint Of Additional Chief Secretary
Next: Balochistan Should Restrict Afghan Immigrants To Camps Like Khyber Pakhtunkhaw: BNP