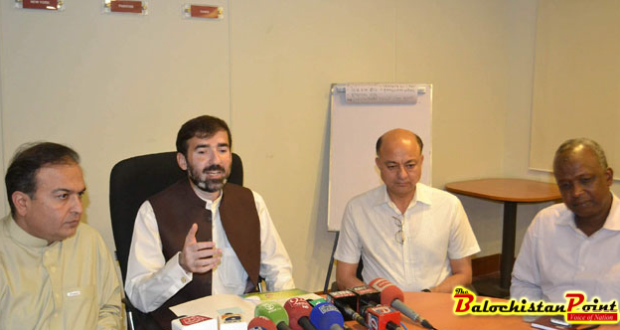 Balochistan: Polio eradication campaign will start on Monday in 30 districts

Quetta: The provincial Emergency Operation Center (EOC) of Balochistan coordinator, Syed Faisal Ahmed, has said that a three-day anti-polio campaign would kick off by 26th of September 2016, covering 30 districts of Balochistan and aiming at a target population of 2,475,389 children of fewer than five years of age.

Addressing the news conference on a press briefing held on Saturday at his office, he said that a total of 6647 teams are deployed; 5182 mobile teams, 860 fixed site facilitation points and 605 transit points, to administer the anti-polio drops to children in the province.

In his press briefing, Mr. Syed disclosed that 2016 is a year when coordinated efforts with significant milestones resulted in a great stride in polio eradication efforts of the country. He said, “Pakistan has only 14 polio cases in 9 months of 2016, 76 % reduction compared to 38 cases for the same period in 2015.

The provincial coordinator said, “All actors; political leaders, donors and partners, community and religious leaders, media and above all thousands of vaccinators   have been playing their part for this success and for the actualization of the country’s goal; making Pakistan polio free at the end of this calendar year”.

Balochistan is one of the provinces which has recently got high expectation from the government and partners for polio eradication. As a result of harmonized efforts of the provincial EOC and polio partners and actors, the province has exhibited remarkable achievements in the year 2016.  The province has only 1 of the 14 polio cases in the past 9 months, which is around 83 % reduction form 6 cases recorded for the same period in 2015. It is a great stride towards our goal to eradicate polio from the province.

However, Mr. Syed Said, “The laboratory result of the recent environmental samples collected from Quetta has been found positive. This result discloses that the virus is present in the environment and can infect and cripple more children anytime soon, if they are not protected”. The only way to prevent the virus catching children is vaccinating all under five children in this campaigns and campaigns in the coming months.

With the support of UNICEF and WHO, more than 2000 community based Volunteers/CBVs/ and around than 400 supervisors are recruited, trained and deployed to work full time starting from this campaign on wards. According to Mr.Syed, all districts in the province are expected to report number of UCs with zero missed children. No children should be missed during and after the campaigns.

Mr. Syed said made a humble request to parents to protect their children from this crippling disease by keeping them in the house for polio vaccination during the campaign days. “Parents traveling with under five children to another areas should cooperate with the transit team at different polio check point to vaccinate their children with polio vaccine” Mr. Syed said.

Published in the Balochistan Point on September 25, 2016