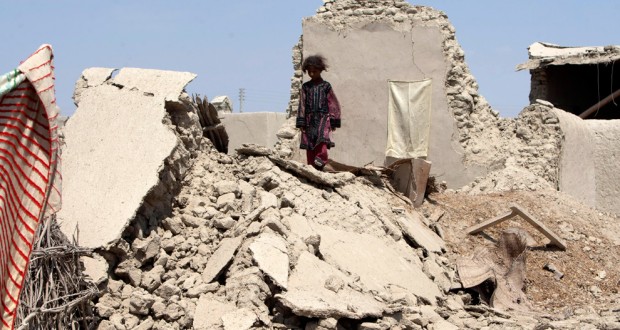 KARACHI: Almost a month has been passed to the deadly Balochistan earthquake and the United  Nationas  (UN)’s Food Security Cluster (FSC) in a report issued on Wednesday cautioned for another disaster in the strife-torn province as majority of the earthquake survivors are facing acute food shortage.

In an assessment reported of the earthquake hit areas of Balochistan, the FSC said in majority areas of the earthquake-hit province have less than a week food stock  and 90 percent of the total earthquake victim population needs immediate food assistance.

“About 46 percent of the households in the areas covered by the assessment reportedly do not have any food stock at all, whereas another 45 percent have food stocks lasting no more than a week. This implies that more than 90 percent of the population is in need of immediate food assistance,” read the detailed report, available with Daily Times.

The National Disaster  Management Authority (NDMA) in another report issued on Monday estimated that 386 people killed, 816 people including the minor children and women were seriously injured, 32,638 houses were completely demolished and another 14,118 houses were partly damaged in quake-hit areas including Mashkai, Mangoli, Awaran, Malar and Dandar.

In the report, NDMA also claimed to distribute a huge amount of the relief goods for affected areas, however, the FSC’ report rejects all the claims.

The FSC report also stated that though the majority (67 percent) of key informants reported that less than 10 percent of the households have enough money to buy food. Around 30 percent of the communities reported availability of food in nearest market, out of which only 6 percent reported that adequate food was available in the nearest usual markets.

Additionally, more than 85 percent of the key informants termed markets as inaccessible or non-functional/destroyed. Agriculture (39 percent of the households), daily labourer (26 percent) and livestock (22 percent) were the three most important sources of livelihood in the area, whereas among these, daily labour was the most affected with a reported loss of income by 48 percent, followed by livestock (20 percent) and agriculture (13 percent). Thus households depending on daily labour have been found to be most vulnerable and these findings highlight the need to strategize overall cluster response to reflect an emphasis on livelihood support.

“As for the livestock, most households own small ruminants with an average of 3.8 animals per household, whereas average ownership of large ruminants is 0.5. The reported loss of small and large ruminants is 15 percent and 17 percent respectively. Fifty eight percent of the communities reported that they have no fodder for their livestock, while another 25 percent reported available fodder sufficient for one week or less,” said the report.

It may be worth mentioning that NDMA has already imposed a ban on the international relief agencies to work in the earthquake hit areas, due to the quake survivors are forced to suffer more. ( Courtesy : Daily Times)