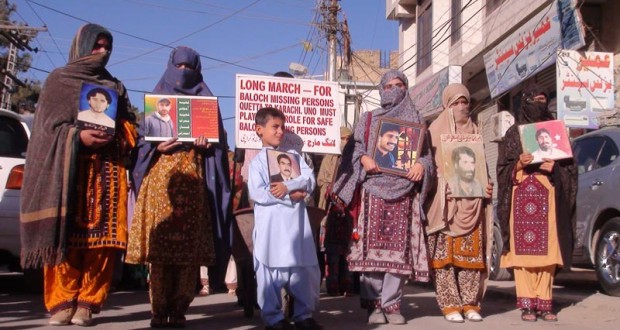 The Voice for Baloch Missing Persons (VBMP) protest,which is becoming one of the world’s peaceful and long protests, has now launched a long march of 730 Km from Quetta to Karachi to press the authorities for recovery of missing Baloch political workers. The Voice for Baloch Missing Persons (VBMP) Chairman VBMP, Nasrullah Baloch and Mama Qadeer Baloch led the long march participants from Quetta. Besides men, women and children were also part of the march in a frustrated attempt for recovery of their loved ones. The Participants of the long march will be traveling from Quetta to Karachi. Family members of missing persons from other districts would also join the long march on their way to Karachi

The Voice for Baloch Missing Persons (VBMP has been protesting for last three years, however, no remarkable developments have been noticed in recovery of Baloch missing persons.  The leaders of the V.B.M.P allege that current rulers have intensified the kill and dump policy in Balochistan and  the  intelligence agencies have picked up a large number of Baloch political workers to suppress their voice but the  officials disagree with the claims.

Though the Chief Minister Balochistan, Dr. Malik Baloch linked peace in Balochistan with the safe release of missing persons and asserted that his government was committed to bring an end to recovery of mutilated dead bodies in the province, unfortunately on Saturday he acknowledged before the media that his government could not accomplish success regarding the release  of Baloch missing persons.

The continued recovery of bullet-riddled bodies of Baloch disappeared persons, and Chief Minister’s confession of failure disclose that neither establishment is interested in the safe release of forcefully abducted people nor the alarming human rights abuse in Balochistan is considered an issue.

Keeping in view the previous threats to Voice for Baloch Missing Persons leaders one can depict any harming act to this long march, therefore, the federal and provincial government and Supreme Court have to take security measures for their long march. Most importantly   the government and establishment need to change their mind set against Baloch people and take any tangible measures.

During the 1311 days long and peaceful protest the role of judiciary is quite questionable and it has failed to get implemented its decisions. Alarmingly, 1971’s scenario is being repeated in Balochistan and this may cause an historical blunder of establishment if no confidence buildings measures are made and forcefully disappeared Baloch are not released.

Published in The Balochistan Point on October 27,2013

2013-10-27
admin
Previous: Balochistan Quake-hit Areas Under Severe Food Scarcity: UN
Next: We are striving to find out a constitutional solution to the Balochistan situation, says Dr Malik Baloch