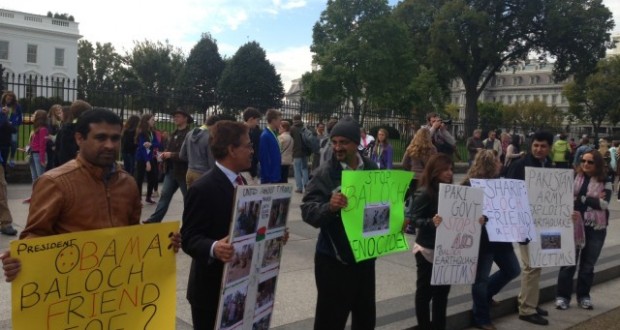 WASHINGTON, DC: Members of the Baloch community protested outside the White House on Wednesday morning as Pakistan’s Prime MinisterNawaz Sharif met with U.S. President Barrack Obama as a part of his three-day long trip to Washington, D.C.

The protesters, who came from different U.S. cities, condemned Islamabad’s fresh military operations against Baloch political activists, including the kill and dump activities and forced disappearances attributed to Pakistani intelligence agencies. Native Balochs from Irani and Pakistani Balochistan attended the protest while several American citizens also participated in the march outside the U.S. president’s residence.

The protest was led by Dr. M. Hossein Bor, a prominent Baloch lawyer who had also testified at the U.S. Congressional hearing on Balochistan in February 2012 and the participants included Laurie Deamer, the U.S. representative of the Baloch Human Rights Council.

The protesters carried posters and banners to highlight the situation in Balochistan saying that the ground realities of the province had not changed despite the elections of May 2013 as Balochistan remained under the control of the Pakistan army and the security forces.

The protesters also called upon Washington to stop Pakistan’s aid as they argued that American tax-payers’ money was being used by Islamabad to carry out human rights abuses against Baloch political opponents.

It was the largest, and probably the only, protest against Mr. Sharif in the United States as the worsening state of human rights in Balochistan has recently gained a lot of international attention that has, nonetheless, led to a little policy review in Islamabad.( Courtesy: The Baloch Hal)

2013-10-23
admin
Previous: Eid Sorrows for Missing Baloch Families
Next: Why no international aid to Awaran?