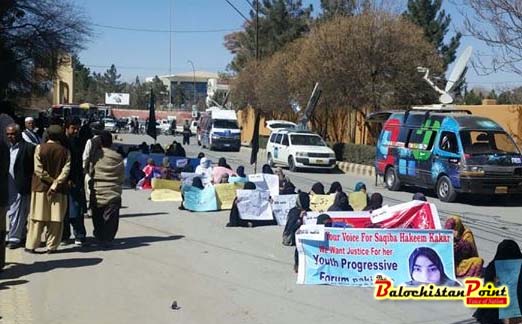 According to the details  family members of Saqiba ,  a 17 years teenage girl student of Government Girls Degree College, Muslim Bagh ,Killa Saifullah district  who had committed suicide  after the college principal refused to send her examination form to the intermediate education board.

The protesters, carrying placards protested outside the Balochistan High Court (BHC), and demanded a hearing of Saqiba Hakeem’s suicide case.  .

Protesters chanted slogans against the principal of Inter Girls College and demanded termination of college principal and clerk and a case be filed against them.

“If a judicial commission is not formed till 29th February then we will carry out our protest in front of Chief Minister House for a long period.” Saqiba’s father said

Balochistan Bar Association and Family members of Saqiba filed an application in Balochistan High Court to hear the case.

Saqiba Hakeem committed suicide last week by taking poisonous medicine, on last day of exams’ form submission as she was denied enrolment for asking to appoint female teachers for the female students.

The chief minister of Balochistan Sardar Sanullah Zehri directed Commissioner Zhob to probe the incident but no measures were   taken   against the responsible. As well as three-member committee was formed by Balochistan Education Minister Rahim Ziaratwal to investigate the “tragic incident”.

However, the family members of Saqiba Hakeem rejected the formed committee and they demand a judicial commission for the inquiry.

Published in The Balochistan Point on February 24, 2016