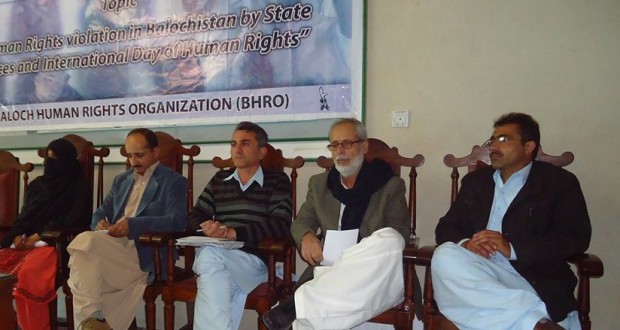 Intellectual Dr Liaqat Sani, in his speech declared if the unrestrained policies of state remained unchanged and prolong, it undoubtedly be creating some great hurdles in front of Pakistani authority.

“Media must not be hiding its real face to give coverage to the Baloch issue which is not only getting fame nationally but internationally as well. Currently there has been a grueling long march conducted by BHRO but the role of media was equal to none.” Criticized Dr Liaqat Sani

Sani highlighted the violation of human rights in Balochistan and said that state services were giving that  a deaf hear which was  one of the most brutalities.  “ Malala’s vision was realistically not much fetching to be giving such a sort of concerns whither our sisters and brother’s vision is vociferously clear but not being telecasted when they launch a press conference to demand for their beloved ones safe release.” Said Baloch intellectual Dr Liaqat Sani

Member of the Human Rights Commission of Pakistan(HRCP)  Faiz Hashami said, “In a well-developed demarcated country there is a functional institutional system that run the legislation but unfortunately here in Pakistan there is not any proper court system to handle all these sort of happenings which are clearly against the international law that demands for the protection of human rights.”   HRCP condemns all those atrocities against Baloch and other community as well and would   ever raise the voice calling for the rights of inhabitants of a specific area.  Said Faiz Hashami

Baloch writer Dr  Babari appreciated   Mama Qadeer’s gallantry attempt who along with other members of BHRO initiated a historical long march  from Quetta to Karachi.  “The grueling march of 756km was not ease thing but has been devotedly subjugated by the walkers in which our sister Farzana Majeed and younger  brother Haider Ali participated with their blistered  feet   which is worth mentioning question mark on the paper-made pledges  of the concerned authorities.” Said  Dr. Babari

Political  expert Sardar Haji Mohammad Ameen  said, “Chief justice was enquiring the Baloch missing case in the Supreme Court but there appeared some Pashto who were brought before the court which is something playing with the feelings of those all missing persons relatives who are awaiting for the safe release of disappeared.”

Balochistan based official of HRCP, Shams Ullaq shared in his speech that HRCP attempted to raise a voice for human rights and always tried to take the prompt attention of international organizations to take notice on the fierceness being committed. “We highlight the sectarian conflicts that are the basic bottlenecks in an appropriate way of systemizing and creating discrimination among all sects abiding over here.”   Said Shams Ullaq

Chairperson of BHRO BiBi Gul, in her speech on the eve of International Day for Human Rights said, “We are here to commemorate the international day for the human rights and their violation under the shadow of BHRO to enlighten the international law that has been imposed decades before in UNO security general assembly.”

“Following those laws we condemn all that atrocities and violation that are against international law which demands for the protection and preservation of the fundamentals of everyone at every corner of the world but in some countries like Pakistan the human rights violation has crossed its limits to humiliate the international law.” Said Chairperson of BHRO

Published in The Balochistan Point on December 12, 2013