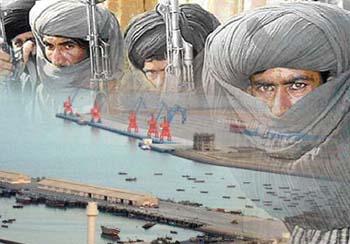 Balochistan, Pakistan’s largest and mineral rich province has been burning since 1947, at times piece by piece, at times wholesale. Problems facing Balochistan have never been addressed by any government to date. Now, when Baluchistan has its first middle-class Chief Minister, Dr. Malik Baloch, dumped bodies of “missing persons”, Hazaras’ genocide, and the exodus of Hindus and Christians goes on unabated.

When a new government was formed last summer, Prime Minister Nawaz Sharif had an opportunity to bring the dissident Baloch to the negotiating table. However, instead of visiting Balochistan, Mr. Sharif, accompanied by the Chief Minister of Balochistan, visited China with the aim of handing over Gwadar-Port and the Reko Diq project to the Chinese authorities. As a result the Baloch people lost hope that the new government would remedy their problems. Regarding their current visit to China, Balochs believe the purpose is to exploit their resources with the collaboration of China. On the other hand Baloch nationalists say that Islamabad is not interested in the Baloch people; that they are only interested in the resources of the Baloch people. Because of this the Baloch people are alienated from Islamabad.

After coming to power, Mr. Sharif thought that he had resolved the Baloch issue when he appointed a middle-class Baloch nationalist to the position of Chief Minister of Balochistan. In doing so he failed to understand Balochistan’s on the ground realities. From the start he had the opportunity to recover the Baloch “missing’ persons” and stop the fifth military operation in the province. But he did not do so. On the contrary, atrocities against the Baloch people, including the Hazaras, have increased.

On August 15, 1947, one day after Pakistan was formed, the Khan of Kalat declared Kalat’s independence. The independent status of Kalat was affirmed by the Pakistan Muslim League several times. In spite of this the “princely state” in Balochistan was invaded on April 1, 1948. The Khan’s brother, Prince Abdul Karim and his militia of 700 resisted this invasion but were crushed.

The second conflict broke out in 1958 when Islamabad merged the four provinces into “One Unit” to counter the strength of East Pakistan (which later became Bangladesh). Subsequently a large “anti-one unit” movement erupted in the Mir Ghat Mountains of Balochistan, led by the chief of the Zehri tribe, NawabNauroz Khan Zehri, along with his militia of 1000 men.

After that NawabZehri was sworn in by the army on a Quranic oath. He surrendered in May, 1959. Ultimately promises were broken and he was imprisoned along with his relatives. His relatives including his sons were hanged and he died in jail.

The third conflict began in 1962 when the central government announced their intention to establish military bases in Balochistan. Resistance to this was continued by Sher Mohammad Marri. The conflict ended with a cease-fire agreement that the Balochs would be given greater autonomy.

Again promises were not kept and a fourth bloody conflict arose in 1973.

This conflict was triggered when Balochistan’s elected NAP (National Awami Party) government was dissolved by Zulfiqar Ali Butto. At the time, all the key Baloch leaders, including SardarAttahUllahMengal, Nawab Akbar Khan Bugti, Mir GhousBakshBizenjo and NawabKhairBakshMarri, were put behind bars.

Prime Minister Bhutto alleged that the government in Balochistan had colluded with Iraq and the Soviet Union to separate Balochistan from both Pakistan and Iran.

Pakistani authorities claimed that a cache of 300 Soviet Union sub-machine guns and 48, 000 rounds of ammunition, intended for Baloch leaders, were found in the house of the Iraqi-Defense Attaché in Islamabad. It was subsequently revealed that the arms had actually been in Karachi and were meant for Iranian Balochs in retaliation against Iran’s support to Iraqi Kurds. It was revealed that the Iraqi Defense Attaché collaborated with Iranian and Pakistan intelligence agents, staging the arms exposure to put pressure on the Iranians.

Therefore in 1973, the Shah of Iran, aided and supported Pakistan by providing US-Cobra helicopters along with pilots to shell and crush the Baloch guerillas in the Marri Mountains.

It is also to be noted that during this conflict well-known socialist figures and journalists, like Asad Rehman, Mir Mohammad Ali Talpur, Dilip Das, Rashed Rehman, Ahmed Rashid and NajamSethi joined the Baloch. They fought with Baloch guerillas against the Pakistani army. Dilip Das and Najam Sethi were arrested. Sethi was released, but Dilip Das was tortured to death in a military run dungeon.

The situation normalized in 1977 when General Zia-ul-Haq in 1977 deposed Zulfiqar Ali Butto and granted general amnesty to the Baloch key leaders and their warring tribesmen.

The fifth and current conflict began to take shape in the late 1990s. It was spurred on in 2004 when a female physician was raped by an army officer in DeraBugti. Nawab Akbar Khan Bugti reacted strongly and demanded punishment for the rapists as the physician was in his “Bahot” (protection). No one heeded his demand. On the contrary the army shelled DeraBugti. In response Baloch guerillas fired rockets at General Parvez Musharraf’s helicopter in Kohlu, Balochistan.

This conflict was fuelled in August 26, 2006, when Nawab Bugti was assassinated in Taratani’s mountains in a military assault. His assassination tremendously changed the circumstances of Balochistan. A full army operation began in the province. The Baloch activists went missing.

Members of the provincial and national assemblies of the Balochistan National Party, headed by SardarAkhter Jan Mengal, resigned in protest against the operation and to condemn Nawab Bugti’s assassination. They held massive rallies in Balochistan against Bugti’s killing. SardarAkhterMengal was jailed. He was released when PPP (Pakistan People’s Party) came to power in 2008.

Published in The Balochistan Point on December 12,2013