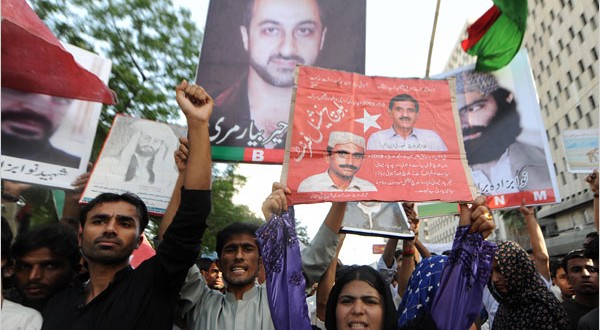 Last week, the Punjab Chief Minister, Shahbaz Sharif, dispatched ten trucks loaded with quilts and shawls worth Rs 9.2 million from Lahore for earthquake-stricken areas of Baluchistan.
Talking to media he said that 30 thousand quilts and warm shawls costing Rs 92.4 million, as 90 more trucks laden with similar supplies, would be sent to the calamity-hit people from Rahim Yar Khan. He also said so far relief items worth Rs 200 million had been sent to earthquake victims of Balochistan under winter package while a sum of Rs 350 million had been deposited in the Prime Minister’s Relief Fund. Everything here but so-called charity in particular is done in full glare of publicity lest some may not know how generously they help; they always mention the sums spent for relief which shows they care for the sum and not for the people. People like Shahbaz Sharif and his ilk will never understand that however warm and cosy the quilts maybe, they never warm the hearts hurt by the continued repression of Baloch for over sixty years now.
Let’s do some simple calculations here; even if two persons share a quilt or a blanket only some sixty thousand persons would get some relief because Balochistan winters are severe and unforgiving. National Disaster Management Authority (NDMA) in a report revealed that a total of 46,756 houses were damaged in the recent earthquake in Balochistan of which 32,638 completely and 14,118 partially. Mind you earthquake’s partially damaged houses too are not safe for living. Baloch have large families but if even for convenience sake we presume 7 members to a house the figure of affected people will number 327292 so these quilts like all other relief items are totally inadequate.
The dead number a thousand or more while the injured run into thousands but they are denied adequate medical help as even the medical camps run by Baloch Students Organization (BSO) Azad and the Balochistan National Movement (BNM) were forcibly dismantled when the army occupied Mashkay on the eve of Eid on October 16. Mahvish Ahmad has  brilliantly narrated the incident.  The Pakistani government determined to punish the people of Awaran and Kech for their support of Dr. Allah Nazar and Sarmachars has continued to deny them expert medical and material help from international agencies.

Naziha Syed Ali Sahiba in an excellent and brave piece ‘Fear & loathing in Awaran’ (November 26th 2013, Dawn) says that according to locals since the earthquake struck large convoys of army and FC have been conducting raids on villages in the district, sealing off areas for house-to-house searches, picking up young men and releasing some unharmed after interrogation. She says the army has now established its presence in parts of Awaran district while earlier it could not venture beyond Awaran city military barracks. The independent Balochistan’s tricolour flag has been replaced by the Pakistani flag in nearby villages and students of local schools made to relearn the national anthem which had long been forbidden. Moreover, army’s increased and visible presence has reportedly driven nearly half the population to migrate from the area.

Ironically, according to Naziha Sahiba, since international organizations have been disallowed consequently Rs 70 million Oxfam funded project meant specifically for earthquake relief has been cancelled. Local NGOs say there are remote areas where even tents have not been delivered. She makes a disturbing revelation that establishment-favoured, faith-based charities have been given free rein to operate in the district. Graffiti on walls by Jamaat-ud-Dawa’s Falah-i-Insaniyat Foundation (FIF), Jamaat-i-Islami’s Al-Khidmat and Jaish-e-Mohammad’s Al Khair Trust are visible everywhere. FIF’s Black-and-white flags line the main street and JI’s banners exhort the faithful to prayer in Awaran city. A FIF camp/madressah is under construction just outside of Awaran. She says no one vouched for the ‘charities’ doing any relief work in the area and overwhelming indications point to these having been injected into the landscape for the purpose of undermining an essentially secular insurgency.

It seems that Pakistani government has taken a leaf out from Israeli approach to the Negev desert Bedouins to deal with the Awaran district’s people. The only difference for the present being that Israelis are forcing the Bedouins into settlements while beginning with Awaran the Pakistani establishment, making use of the devastating earthquake, wants to put Baloch people in settlements that they hope they will be able to control. The ‘model town’ that Nawaz Sharif had announced on his visit to Awaran is meant for the Negev Bedouin like resettlement. The establishment would give an arm and a leg if it could possibly restrict Baloch population to settlements where they could be strictly controlled and watched. Quilts and empty promises are no salve to the injuries that the Pakistani state has inflicted on Baloch people.

If quilts do not warm hearts then neither does the empty rhetoric which emanates from the Supreme Court (SC); so far 93 hearings have taken place but there has been absolutely no movement either towards recovery of Baloch missing persons or towards prosecution of even a low ranking personnel of the Frontier Corps. Brigadier Aurangzaib, Colonel Naeem, Major Tahir, Subedar Mominullah were among the 19 named by the Deputy Inspector General (DIG) of the Criminal Investigation Department (CID) Balochistan in the SC and were ordered to appear before the DIG for investigation but the order too proved to be a damp squib as the FC says these officers and men do not work for it so they cannot be produced.

Ironically the state which refused even to acknowledge that any Baloch person was missing until now heard from the horses’ mouth, in this case the newly appointed Defence Minister Khawaja Asif, that 738, yes seven hundred and thirty eight, missing Baloch persons would be recovered before December 10th. No one is holding breath because nothing will happen. The presenting of 35 missing persons ordered by the SC hasn’t been fruitful as ultimatums after ultimatum is futilely hurled at those who are responsible for the ‘dirty war’ against Baloch and others. The SC threats of action against the IGFC and others is an attempt to throw dust into peoples’ eyes so that they may not see the real designs of establishment of which the SC too is a part. Baloch do not expect any sort of amelioration of their problems by Pakistan.

Tailpiece: All claims of making Balochistan a heaven on earth are as bogus as those who make these promises. The teachers and non-teaching staff of Balochistan University after protesting for three weeks at the main gate of campus came out on streets with begging bowls in hands; they haven’t been paid salaries for some time; needless to say that the middle class chief minister had claimed a phenomenal increase in education budget.  Ironically Daily “Intekhab’ reports that Muhammad Khan Achakzai, Governor Balochistan, has promised Rs. 5 million donation to his former alma mater the Forman Christian College. It is a calculated policy to ensure that Baloch remain deprived of education and Sardars be blamed for all the sins of omission and commission that establishment commits. If anything like conscience existed here the provincial government and the central government would have resigned for the lies they tell and the charades they perpetuate but then living by conscience is an alien concept here. (Courtesy : View Point Online)

Mir Muhammad Ali Talpur has an association with the Baloch rights movement going back to the early 1970s. He tweets at mmatalpur and can be contacted at mmatalpur@gmail.com

Republished in the Balochistan Point on December 12, 2013

2013-12-12
admin
Previous: If the abducted Baloch are criminals, they should be produced in courts: Mama Qadeer Baloch
Next: Balochistan cauldron