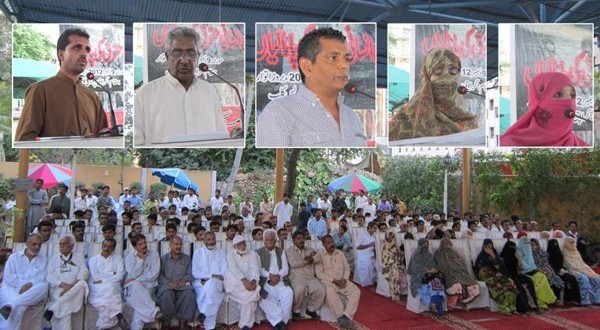 If the abducted Baloch are criminals, they should be produced in courts: Mama Qadeer Baloch

Mama Qadeer Baloch said that if the abducted Baloch are criminals, they should be produced in courts and given the opportunity to prove themselves. The Baloch leaders also appealed to the UN and international organisations to put pressure on the Government of Pakistan.

Vice-chairperson of Voice for Baloch Missing Persons (VBMP) Mama Qadeer Baloch shared dedication of his life for the safe recovery of ‘18,000 missing persons’.

Writer and journalist Mohammed Hanif said that everyone knows that missing persons have been taken away by those whose salaries are paid by us.”

Senior Baloch writer Mohammad Ali Talpur said , “ If Pakistan did not learn from the separation of  Bangladesh then it will never learn now.”

Talpur criticized government regarding the issue of Baloch missing persons and said that if Dr Abdul Malik Baloch  was powerless then he should have been  at home.

Meanwhile, Human Rights Commission of Pakistan’s Asad Butt warned the forces to stop atrocities. If injustice does not stop, then every child would be picking up arms.

Sister of missing Zakir Majeed, Farzana Majeed, said that the country had constantly violated Vienna declaration on human rights. “These forces violate the Constitution by picking up men, torturing them and throwing up their bodies” she claimed.

Nargis Baloch, of the Daily  Intikhab  while addressing to the seminar termed  the current government  only a puppet democracy in Balochistan  and named it a government  by the Frontier Constabulary.

Published in The Balochistan Point on December 11, 2013