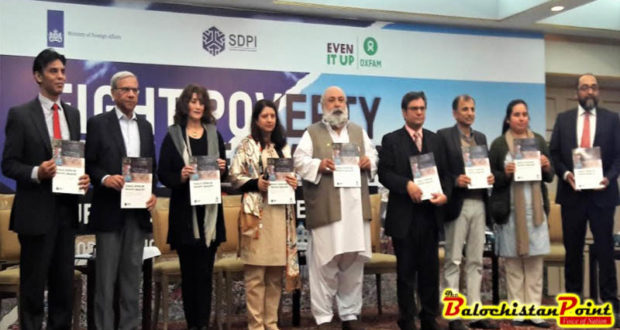 ISLAMABAD: 21st January 2019 – Oxfam’s global inequality report was launched at a ceremony jointly organized by Oxfam and Sustainable Development Policy Institute (SDPI), as political and business leaders gather for the World Economic Forum in Davos, Switzerland. ‘Public Good or Private Wealth’ shows the growing gap between rich and poor is undermining the fight against poverty, damaging our economies and fueling public anger across the globe. It reveals how governments are exacerbating inequality by underfunding public services, such as healthcare and education, on the one hand, while under taxing corporations and the wealthy, and failing to clamp down on tax dodging, on the other. It also finds that women and girls are hardest hit by rising economic inequality.

In his welcome remarks, Oxfam in Pakistan’s Country Director said, “The key themes of the global report are: Economic inequality; Tax – individual and corporate; Gender; Negative impact of inequality and underfunded public services; and Public services as a way for more gender equality and as a way out of the inequality crisis we are witnessing. There is a need for delivering free health care, education and other public services that also work for women and girls. In Pakistan, we should ensure social protection for all and design all services to ensure they also cater to women and girls. Iequality is a man-made disaster effecting billions of people.”

The report reveals that the number of billionaires has almost doubled since the financial crisis, with a new billionaire created every two days between 2017 and 2018, yet wealthy individuals and corporations are paying lower rates of tax than they have in decades. While twenty-six of the richest people own the same wealth as the 3.8 billion people who make up the poorest half of humanity and the super-rich hide $7.6 trillion from tax authorities depriving developing countries of $170bn a year.

During the panel discussion on inequality, renowned Economist Dr. Kaiser Bengali said, “We have created two Pakistan’s: One for the elite and another for the people. While the richest continue to enjoy booming fortunes, they also enjoy some of the lowest levels of tax. Wealth is particularly undertaxed.” Other panelists including Dr. Ikram ul Haq and Mr. Musharraf Zaidi, shared their opinions on the effects of inequality public services and education.

Speaking on global Inequality, Oxfam’s Asia Inequality Campaign Lead Mustafa Talpur said, “We are calling on governments to reduce the unpaid hours women spend taking care of their families and transform our economies to deliver universal health, education and other public services. To make this possible, the richest people and corporations should pay their fair share of tax. This will drive a dramatic reduction in the gap between rich and poor and between women and men.”

The world’s sixth most populous nation, the Islamic Republic of Pakistan has since its existence witnessed constant challenges along ethnic, religious and political interests, while concurrently displaying resilience and dynamism. Pakistan is today the 44th largest economy (GDP) and despite vast natural resources and promising conditions, the country’s human and economic potential remains largely underdeveloped.

Published in The Balochistan Point on January 21, 2019