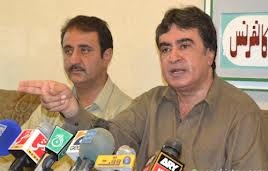 QUETTA: Balochistan National Party (BNP) will observe shutter down strike across the province on July 4 in protest against what they term unjust actions of security forces and its ‘death squads’ in Wadh area, the hometown of BNP chief Sardar Akhtar Mengal. Senior Vice President of BNP Dr Jahanzeb Jamaldini announced that his party will observe shutter down strike on July 4 and wheel jam strike on July 5 across the province. He made these announcements during a protest demonstration outside Quetta Press Club on Tuesday. Dozens of BNP workers converged outside the press club and chanted slogans against security forces for their alleged involvement in creating law and order problems in Balochistan. Jamaldini said security forces had been raiding houses of BNP leaders and growers for the past couple of days in order to harass them. “Some elements with the backing of security forces are trying to create law and order problem in Wadh. There is a death squad backed by security forces paving a way for operation in the area to eliminate the party from political arena of the province,” he said. The protesters were holding placards and banners inscribed with slogans against security forces. They alleged that Deputy Commissioner Samad Lasi was backing the death squad which was harassing BNP activists.

2013-07-03
admin
Previous: Freedom of speech: A good lesson from Bangladesh
Next: Youth unemployment in Balochistan