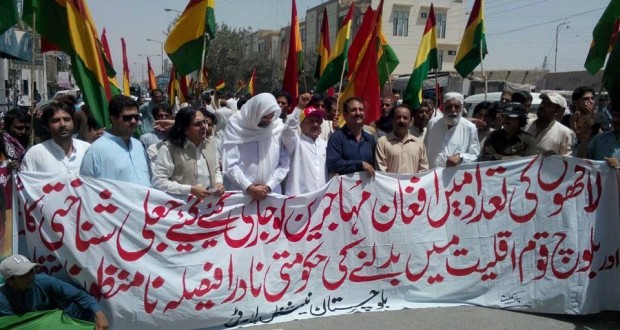 Quetta: Balochistan National Party, on Tuesday, protested against issuance of CNICs to Afghan immigrants in Balochistan. BNP demanded that NADRA should cancel the 4 million CNICs issued to Afghan Immigrants.

BNP held a protest outside NADRA office on Zarghoon Road Quetta. Leaders from BNP and BSO along with dozens of activists took part in the protest rally. The speakers on the occasion said that Afghan Immigrants have negatively affected the society in Balochistan. Lawlessness in Balochistan is due to influx of Afghan Immigrants and therefore all the CNICs issued to Afghan Immigrants should be cancelled immediately, demanded the BNP leaders.

BNP leaders accused a ruling party, without naming, for involvement in issuing CNICs to Afghan Immigrants. Ruling party is trying to restore 85,000 blocked CNICs of Afghan Immigrants alleged the speakers during the protest rally.

Apart from Quetta, BNP organized protests in several other cities including Hub, Kharan, Dalbandin, Panjgur, Gwadar and Noshki. The series of protests started by BNP against issuance of CNICs to Afghan immigrants will continue till 27th August, all over Balochistan.

Published in The Balochistan Point on August 13, 2014.

2014-08-13
Editor
Previous: In Pakistan establishment decides who forms government: Akhtar Mengal
Next: Democracy is the only guarantee of progress, prosperity, peace and stability in the country: Dr. Abdul Malik