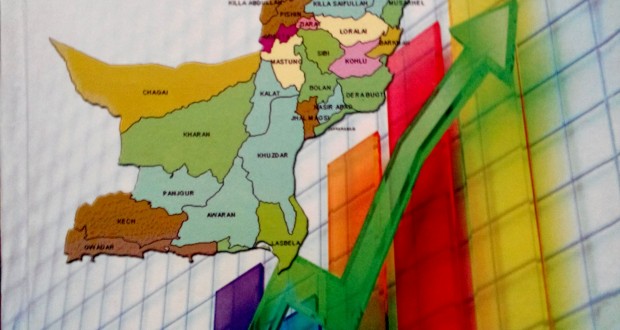 The book being reviewed is actually compilation of the articles written by Mr. Siddique Baloch on economic issues of Balochistan over the course of last few years. Those articles have been classified into different chapters and printed in the form of a book. It’s a treasure of information for all those who want to understand the economic problems faced by Balochistan. Mr. Siddique Baloch has written in great lengths about the economic problems which contribute to the prevalent backwardness in Balochistan.

This book challenges the myth that Federal government is not responsible for Economic backwardness of Balochistan. The author writes that Balochistan has been kept backward by design since the British Raj Days. It all started in 1839 when Baloch tribes didn’t support the British expedition to Afghanistan. After that British started a policy of containment and keeping the people of erstwhile Kalat State Backward. Author further adds that British developed the biggest canal irrigation system of world in Sindh and Punjab, established high quality educational institutes in these provinces and kept Balochistan backward by design because the people of Balochistan were considered rebel by nature.

An entire section is dedicated to the development which notes how Pakistani government continued the policy of British Raj. The author has quoted several examples of how development work in Balochistan was either sabotaged or delayed on purpose. For example, M2-Motorway connecting Islamabad with Lahore was built in 10 months while RCD highway connecting Karachi-Quetta-Taftan is under construction for last 60 years. Author has candidly named Asif Zardari and Yousaf Raza Gillani for transferring the road development funds of Balochistan to Larkana and Multan respectively. Some sections of the book can be considered as a rant against the unfair policy of Federal government towards Balochistan.

Likewise, Author has severely criticized the spending of development funds through Members of Parliament and Provincial assembly. This is just a waste of many and economic development can never be attained using unplanned expenditure irrespective of the value of the funds used, according to the author. One can’t disagree with the author because in last 12 years especially billions of Rupees have been spent on development programs identified by members of Provincial assembly. At the same time there is not a single project that has contributed to the well being of people in a meaningful way.

The biggest contribution of this book is that it reveals why Balochistan in under permanent economic recession. In Balochistan a parallel black economy functions that is much greater in size as compared to the legal economy. Most of vehicles driven in Balochistan are smuggled and Oil is also smuggled from Iran in huge quantities and transported to, as far as, Multan with patronage of government officials. The bazaars of Quetta are filled with smuggled goods and thus most of the products consumed are smuggled. In such a case the government can’t collect revenue from the economy and the benefit of all economic activity goes in pockets of a small group of people. As a result there is a permanent recession in Balochistan and it’s by the will of government officials because they let the smugglers scot free after taking their share from them.

There are also some shortcomings in the book. There is no mention of dates in the book and therefore it becomes difficult to assume when the article was published. The persisting situation at the time of publishing of an article has bearings on its analysis. So the dates should have been mentioned along with every article. There is a lot of repetition and the same thing is said three or four times in some cases. The contents of the books are pearls of wisdom but these have been organized and arranged in a poor way.

This is an excellent book and provides a lot of food for thought for the people living in Balochistan, notwithstanding its shortcomings. It’s a must read Book for everyone who wants to explore the causes of Balochistan conflict. The author stresses on number of occasions that Balochistan can only develop if ample resources are spent on Agriculture, irrigation, livestock, fisheries, mining and forestry. These are the backbone of Balochistan economy and without them Balochistan can never develop. The officials in Federal government and Chief Minister Balochistan and his team should focus on these aspects of economy rather than meaningless buildings and roads.

Published in The Balochistan Point on July 13th, 2014

2014-07-13
Editor
Previous: Letter: An act of violence in Science College
Next: Vehicle of Provincial Minister Snatched in Quetta