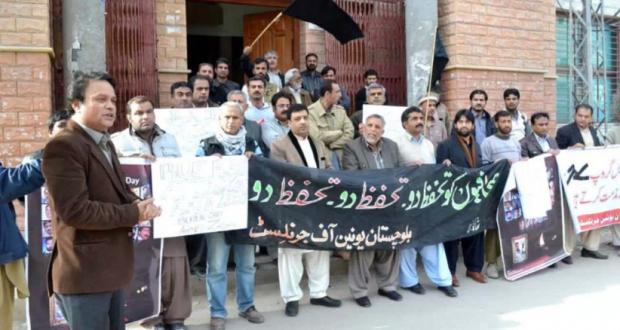 Quetta:  Members of the   Balochistan Union of  Journalists (BUJ)  staged a demonstration to  protest  against Killing of three staff members of Express News Channel  in Karachi  and  bid  to  abduct  Bureau Chief  Al Jazeera  in Islamabad in front of  Press Club here Monday.

According to the details journalists belonging to print and electronic  media   chanted slogans against killing of journalists and demanded for arresting and execution of their murderers during protest at Quetta Press Club.

The journalists shouted slogans against terrorists and security of journalists. They also announced three day mourning. Addressing   on the occasion  president Balochistan Union of Journalists (BUJ) IrfanSaeed and President  Quetta Press Club Raza-ur-Rehman  said that journalists  stake  their  lives  and come  to the  field for  discharging their professionalobligations. Whatever hurdles terrorists create in our way, we would continue our mission.

Published In The Balochistan Point on January 21, 2014