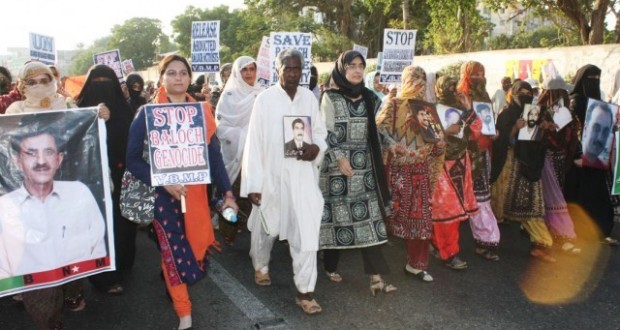 Balochistan – into the Spotlight

Despite extreme human rights abuse in Balochistan, the Baloch people bravely struggle to cast aside the yoke of oppressive regime.  In 2009 Jalil Reiki was abducted and three years later his disfigured remains were recovered in the Kech district of Balochistan.  Jalil’s father Mama Qadeer resolved to do everything in his power to bring an end to the enforced disappearances and extra-judicial killings in Balochistan.  Mr. Qadeer placed himself in the public spotlight, by constructing a protest camp in front of the Quetta Press club in Balochistan.

Despite being continually harassed, threatened, and even attacked, now vice-president of Baloch activist group Voice for Baloch Missing Persons, Mr. Qadeer continued his demonstration staging hunger strikes and displaying posters covered in photographs of the victims of abduct, kill and dump policies for over 1300 days.

In October, 2013, Mama Qadeer packed up the Quetta protest camp and began the #VBMPLongMarch.  The demonstrators marched over 700km to Karachi, in 27 days.  Upon reaching the Karachi Press Club, a seminar was held where senior   Baloch  writer Mir Mohammad Ali Talpur, VBMP vice-president Mama Qadeer, as well as Banok Sammi Baloch, Banok Farzana Majeed Baloch, and other activists delivered inspirational speeches.  At this Seminar Mama Qadeer announced his intention to continue the #VBMPLongMarch until they reached Islamabad.  Afterwards, Mr. Qadeer and the demonstrators resumed their journey and now they have reached Punjab. Prior to leaving Hyderabad, Mama Qadeer, Mir Mohammad Ali Talpur and the VBMPLongMarch protestors were invited to hold a press conference at the Hyderabad Press Club.

In Geneva, Switzerland, Mehran Marri Baloch has delivered several presentations and speeches to the United Nations Human Rights Council.  Baloch Republican Party chapters around the world hold regular demonstrations and seminars protesting the ongoing Genocide in Balochistan.  Groups such as Baloch Youth Wing, BSO-Azaad,  BNM, BRP, and many others, frequently hold peaceful protests and worker strikes within the Balochistan region.  Despite the efforts to garner international attention, the people of Balochistan continue to suffer.  The United Nations refuses to uphold international laws and human rights standards.  The United Nations seems to only demonstrate a willingness to enforce international laws when it is directly and substantially beneficially to the Security Council member states.

For every Baloch witness killed by state’s  agents, the blood of Balochistan is smeared upon the hands of those politicians and governments who not only refuse to act, but are implicit, facilitating Pakistan’s severe violations of Human Rights in Balochistan.  We citizens of the international community have a responsibility to act; we can no longer condone the acceptance of atrocity.

We must follow the example set by Mr. Qadeer, Mr. Mir Mohammad Ali Talpur, Nawab Akbar Khan Bugti,   including Baloch writers  and many others I am reluctant to mention but deserve great praise for their reports,  articles, tweets, posts, videos, and pictures.  Thanks to the bravery and vigilance of so many activists, the struggle of the Baloch people is becoming more and more recognized by the citizens of the international community.