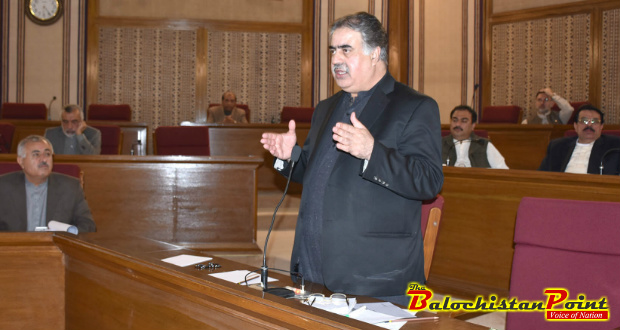 Quetta : Chief Minister (CM) of Balochistan, Nawab Sanaullah Zehri, has said that bureaucracy is subservient to the parliament of Balochistan while addressing Balochistan Assembly session, on Friday.

First Session of Balochistan Assembly in 2016 was convened on Friday evening with Speaker Rahila Durrani on the chair.

CM made it clear to the provincial bureaucrats that if they did not attend Balochistan Assembly session when required then they will be sacked.

“Bureaucracy should obey all the genuine orders of the elected representatives,” ordered Nawab Zehri.

He also announced to cancel all the appointments and recruitments made from December 11 to 24 when there was no functional government in Balochistan due to power transition.

CM vowed that under his leadership Balochistan government will not surrender any funds to federal government like it has been happening in past few years.

“People of my village are languishing in district Jail Quetta for no reason due to Dr. Malik Baloch,” Mr. Khetran said.

He went on to claim that a person who just bagged 900 votes from his constituency was awarded development projects worth Rs. 520 million by Dr. Malik’s government.

“I have documentary proof of how many people Dr. Malik has rewarded using his discretionary fund,” said Sardar Khetran while continuing his tirade against Dr. Malik regime.

Prince Ali Ahmad of PML-N said that all development schemes in the province should be linked up with a central master plan. “There should be a separate master plan for every divisional headquarter,” elected representative from Lasbela said.

William Barkat, minority member of assembly of PkMAP said that not a single case of blasphemy law has been registered in Balochistan and it proves religious harmony in the province.

Nasrullah Khan Zeeray of PkMAP lamented that resolutions of Balochistan Assembly are not given due importance.

Published in The Balochistan Point on January 9, 2016