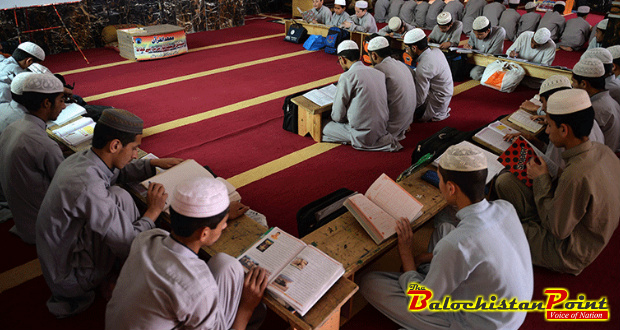 “Acquire education even if you have to go to China” this was the holy religion of Islam which given direction to its followers, to explore the globe in light of Quran verse which says’ “I (God) created earth and Skies and it’s made for you (human being) to explore it.” This proves that religion itself emphasizing on the importance of education for human beings. Every religion across the globe emphasizes on the importance of education and says in its holy literature that peace and tolerance across the entire globe is only possible through education.

After the inception of Pakistan some of the sectors which required proper attention remained behind the race with globe and education sector was one among them. In 21st century a huge section of population of Pakistan are not equipped with basic education.

In Balochistan 1.6 million children are out of school due to unavailability of education facilities in more than 53% hamlets across the province. The province having totally 22,000 hamlets among these only 10,000 hamlets have access to basic education in shape of schools. Rests of villages depend on the religious education institutions called Madrassahs.

This is the province where thousands of Madrassahs are providing education without any support for government. These Madrassahs are producing literate people according to the definition of literacy. Unfortunately, the students of Madrassahs are not enrolled in education department database. These institutions are dependent on charity of the local people and there is no accurate data about their numbers. Majority of the sources say that the number of these institutions are more then 6,000 and only 47% of them have registration with different institutions the rest are serving without any legal status.

In last budget the government of Balochistan increased the budget allocation in education sector to 24% with extra ordinary efforts to give access to all those villages where the education facilities are not available to ensure the enrollment of 1.6 million children who are out of schools. This is a big challenge for education department as currently education department doesn’t have the database of overall schools less villages. It will be very difficult for education department to extract the overall data of school less villages in near future and do appropriate planning for the enrollment of 1.6 million out of schools children due to unavailability of basic means.

How we can overcome on these issues, it is a big challenge not only for education department but also for those players who are investing through different donor agencies in education sector to overcome these issues. There are some potential opportunities which need to curb for the overcoming of existing issues, we do not mean to overcome all issues completely but at least can provide a foundation with sustainable ways and means.

Among 1,200 school less villages every village having its Mosque which can initially be used for Education facility till the availability of resources for its building construction. Social Mobilization may play its vital role to mobilizing the communities for provision of the shelter for educational purposes in shape of Mosques. These Mosques can reduce the expenses of education department for time being to initiate the proper classes, with passage of time the issues may settled on permanent basis.

The potential human resource for running of these Mosques Schools can reduce the rate of required resources through hiring of local male and female on daily wages. Initially teachers may be hired on minimum qualification with agreement that they will improve education with passage of specific time line. This will reduce the weight of education department with ensure sustainability of all institutions’. In previous processes it remains a big challenge for education department who didn’t protected their institutions from neither any minor nor major destruction due to hiring of external human resource from far-flung areas. Among these hiring the priority should give to religious men who are serving there if he/she could fulfill the basic requirement.

The interaction of education department with Madrassahs will also attract those religious education institutions that are reluctant in registration with public sector but serving for the purpose of education sector requirements’. The dialogue and practical interaction of these institutions will permanently resolve the basic issues of education sector where initially they will get access to all those 12,000 hamlets through considering their Mosques which are school less where approximately one million school age children lives, with ensure enrollment of 0.6 million students who are currently enrolled in Madrassah across the province. The management issues will itself resolve with passage of time, commencement of every productive job is difficult but not impossible.

Published in The Balochistan Point on January 9, 2015