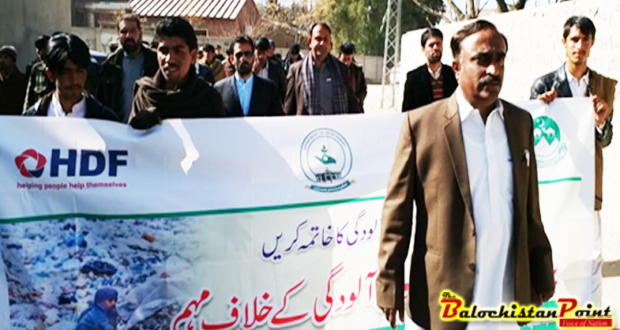 Campaign Against Plastic Pollution in Zhob

Zhob: Environmental pollution has become a vile threat to human and wildlife globally. Plastic is not an inherently good object as it is composed of toxic pollutions that have potential to cause great harm to the environment in the form of air, water and land pollution.

“In first phase we told shopkeepers not only to avoid polythene bags but also we have given them the alternate as well [eco-friendly bags,” Deputy Commissioner Zhob Jabar Baloch told.

Some areas of Zhob region were declared as drought affected areas by provincial government few months ago. Rainfall system in the region has badly affected by climate change in recent years. Livestock suffered the most claimed in a report.

Addressing to a rally Mandokhail said, “we are declaring 2019 as polythene bags free year and claimed polythene bags will be completely replaced by eco-friendly bags in Zhob in next twelve months.”

A survey by the Pakistan Environmental Protection Agency found that about 55 billion bags are currently being used and is expected to increase yearly 15 percent.

Chief Officer Zhob Municipality Waheed Badeeni said that polythene bags were  the biggest stumbling block in our cleanliness drive, adding that they were in cooperation with environment department to replace polythene bags with biodegradable bags.

A rally against plastic pollution was conducted by environment department Zhob. It was started from environment department office and marched across the city. Dr.Khair Muhammad Mandokhail told that toxic chemicals leach out of plastic and are found in the blood and tissue of nearly all of us. Exposure to them is linked to cancers, birth defects, while addressing to the hundreds of participants.

We have conducted rallies seminars with the cooperation of environment department to convert our dream into reality by making Zhob as plastic free city, Muhammad Ikram Khan Regional Head Human Development Foundation stated.

Mandokhail smiles anyway, with a shine in his eyes, “it’s not possible to achieve our planned targets without public cooperation. We’ve initiated door to door campaign to inform the public about worst effects of plastic pollution.

Abdul Hadi is a   freelance writer and student of Media Studies in University of Balochistan.

Published in The Balochistan Point on February 19, 2019