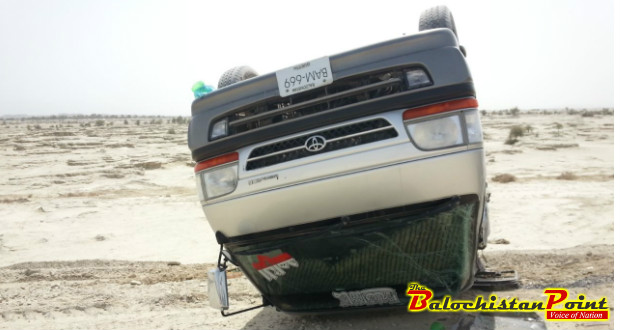 Turbat – Due to Careless driving of driver of Mini-Van, over 10 passengers have been wounded near Turbat on Tuesday, learnt The Balochistan Point.

A mini-van of Al-Zahid Transport lost its balance due to over-speeding of the driver and fell down injuring majority of the 15 passengers on board.

“This accident took place only due to careless driving of the driver,” Masood Alam, one of the injured patients, told The Balochistan Point. He further added that, “accidents due to over-speeding are a norm in Makran division.”

Another passenger told The Balochistan Point that Mini-Vans travelling from Turbat to Karachi travel at speed of 130 Km/h, which is too high based on the poor condition of roads and result in a lot of accidents.

Passengers in Makran division have urged National Highways and Motorways Police to take action against the carless drivers amid the increasing number of road accidents.