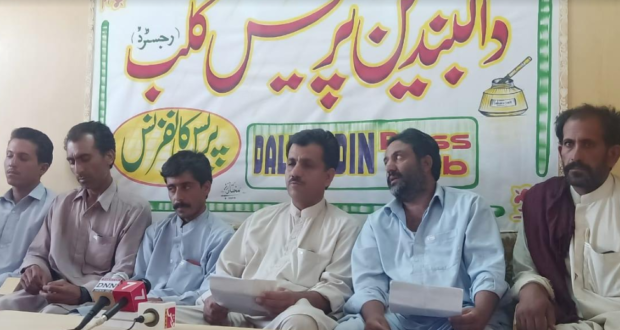 CHAGAI: Several labourers have demanded the authorities concerned to get paid their wages as two private contractors allegedly defrauded them after completing the fencing work under the supervision of Army in Bahramchah and surroundings at Pak-Afghan border in Chagai district.

During a press conference at Dalbandin Press Club, Ali Akbar, Inayatullah, Mehrullah, Mohammad Ibrahim, Abdul Malik and their colleagues said they worked day and night during harsh weather in tough mountains but unfortunately their remaining wages were not paid by the contractors leaving them to suffer. They claimed over right million rupees were supposed to be paid to them by the contractors whose cheques were bounced and they were left unpaid after both contractors managed to escape. “Dalbandin Levies Force has arrested an accused from Turbat following an FIR lodged by them, but still we are waiting to be paid.”

The labourers answered a query, saying they have submitted a written complained in this regard to the Army officials in Dalbandin too. However, they said their matter was not being resolved by anyone, compelling them to bring the issue into media. They requested the Army Chief and Commander Southern Command to take notice of the said scam and fulfill the requirements of justice.

Published in The Balochistan Point on July 2, 20202