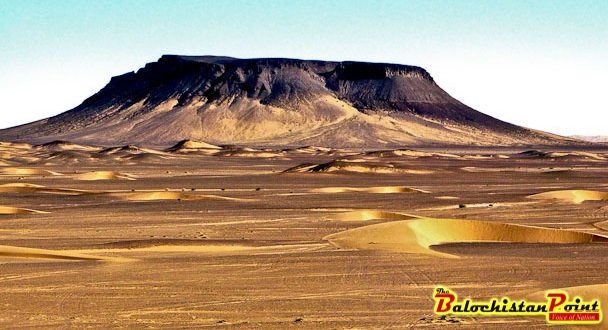 Chaghae is a Balochi word which means the land of well. In old era people used to dig wells to get water for their fertile land and domestic purpose. Gradually the word “Chaghae” changed into Chaghi.

Chaghi has great topography in Balochistan. It is situated in west of Balochistan and shares border with Iran and Afghanistan . In1896 it was given status district in British government. Earlier Noshki was also part of Chsghi but in 2004 it separated from Chaghi. it has three Tahsils Dalbandin, Nokkundi and Chaghi with 11 Union Councils.

Chaghi is divided in two parts naturally Mountains and the second is desert ed area which is called (Chaghi sera)۔ It is totally barren and dry area. No other fruits are grown except date in the area.

Many natural resources are found in Chaghi like Gold, Silver, copper, iron, Marble and different kinds of precious stones. Because of these minerals Chaghi is popular in all over the world, known as gold sparrow.

There are five areas where gold and copper are found. Saindak is a famous one where exploitation is going on for years. Recodik gold project is also one of the mega projects of the world.

On 28 May 1998, the atomic bomb was also tested in mountains of Rasko, located in Chaghi.

Despite being resource rich land, the people of Chaghi are living under the worst poverty. They are suffering from different diseases. Shortage of clean water drinking, load shedding, dismal state of education, lack of health facilities and unemployment are the chief problems.

2017-11-16
admin
Previous: Your first responsibility is “To educate yourself”
Next: Kalat: Govt Girls Middle School Iskalkoo lacks Basic Amenities and Its Own Infrastructure