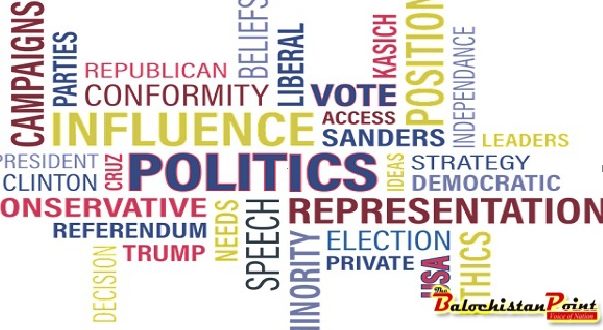 Character does not matter in politics of Pakistan

“Leadership is a potent combination of strategy and character. But if you must    be without one, be without strategy.” H. Norman Schwarzkopf

“How do we know who to chose?” a question posed to a great Greek philosopher   and a political sage Plato; He answered that rulers should be chosen according to their character—their honesty, reliability, probity, disinterestedness, sense of justice, and moral uprightness.  He, further maintained: “The community suffers nothing very terrible if its cobblers are bad and become degenerate and pretentious”, he wrote in his book “the republic”. “But if the guardians of the laws and the state, who alone have the opportunity to bring it good government and prosperity, became a mere sham, then clearly the community is completely ruined.”

“It is our character that supports the promise of future “wrote another famous writer William bennet, the author of the bestselling Book of virtues “far more than particular government program or policies. The president is the symbol of who the people of the United States are. He is the person who stands for us in the eyes of the world and the eyes of our children”.

In a president character is everything “, Peggy Noonan wrote in her assessment of Ronald Regan. A president does not have to be brilliant. Henry Truman was not brilliant but he helped save Western Europe from Stalin. He does not have to be clever, you can hire clever…but you cannot rent a strong moral sense. You can’t acquire it in the presidency. You carry it with you”.

Apart, our religion also lays great emphasis on mastering the good character. Our beloved prophet (salat and Salam be on him) earned the title of SADIQ (truthful) and AMEEN (trustworthy) due to his exemplary code of conduct. He was reported to have said” Allah, the sublime has sent me as an apostle so that I may demonstrate perfection of character, refinement of manners and superiority of behavior.” In another narration he said:” The best among you are those who have the best manners and character”.

Moreover, the clauses enshrined in the constitution pertaining to the qualification of a candidate aspiring to be a legislator also requires him to be a person of good character. These are as   under:

Article 62(1) d he is of good character and is not commonly known as one who violates Islamic injunctions;

Article 62(1) f he is sagacious, righteous, non-profligate, Sadiq and Ameen, there being no declaration to the contrary by a court of law;

Above mentioned clauses of the constitution serve as a prime tool to purge the politics of evil forces and debar the corrupt, unscrupulous, unprincipled and characterless people to be part of sacred parliament of Islamic republic of Pakistan.

Sadly, character in Pakistani politics seems to have no value.  Our scoundrel and self-centered politicians have made it a non-issue. Thecurrent spree of election for general polls 2018 vividly suggests that character is no longer a touchstone here in Pakistan to be qualified as a member of legislative assembly.

It is really a heart-wrenching experience to observe the mechanism of awarding tickets adopted by almost all mainstreampolitical parties of Pakistan. In this process of paramount importance, the character of the candidate did not come under any question, only the ability to win the polls no matter through fair or unfair means became the sole standard of selection for nomination. Consequently, the same clique of ugly and tainted faces begrimed with corruption and moral decadenceisganged up to occupy their positions in the august house (parliament) again.

Surprisingly, PTI a party that claims to be a flag bearer of change, arch rival of the parties of status quo and a hope of desperate and underprivileged populace following the footprints of its predecessors (the parties of status quo) has also surrendered to the electable. This party, extremely sorry to say, has now turned into a garbage collection unit that is collecting the garbage from all other political parties in guise of turncoats. It is according these birds of passage a cordial reception without questioning their character and competency.Defectors, therefore, find it a golden opportunity to conveniently get clean chit after creeping through the cocoon of PTI.

There is a special phrase for these ‘lotas’ (political turncoats) in Serbian language. Such people are pigeonholed as “tumbling pigeons”, after a breed of pigeons that perform dazzling flips and somersaults in flight. The pigeons can’t help themselves. They are bred for this kind of behavior over many generations. But when our politicians defect, they know exactly what they are doing and why they are doing it. It is quite disgusting. Unfortunately, we as a nation have accepted this defection as a norm of the day.  No stigma is attached to it. That’s why there is hardly any hullabaloo on this shift of loyalties in our country.

Imran khan, the supremo of PTI when questioned about his tilt towards the electable (the incarnation of incompetency, mediocrity and venality), he replied that it was his compulsion. His detractors now ask that if he had to carry this trash with him then why he staged a mammoth sit-in in capital city of the country and delivered lengthy sermons in order to sensitize the people about  the importance of character in politics. They believe that khan sb has reneged his words and like his all other erstwhile moves, has takena u-turn on his own policy once again.

Moreover, his critics also claim that how dirt can be cleansed with dirt. Suppose, if PTI carries the day on 25th July and holds the reins of the country, Khan sb would have no option other than the available pool of so –called electablesthat are characterized as the manipulators of the ballot, practitioners of the art of grand larceny and plunder to carve out his cabinet. If it so happens, the dream of corruption free Pakistan ruled by men of enviable character will again remain elusive and the hopes attached to PTI  to bring about change and reform the system would be swept awayby the Tsunami of the electables.

In addition, Khan while embracing the electable also failed to realize its repercussions at the constituency level. People viewed khan sb as deus ex machina, a messiah who will help them get rid of the chronic rule of their local feudal lords, pirs and tribal chieftains who kept them under their oppressive rule since antiquity and kept exploiting them for their vested interests. But to their dismay, all their hopes were dashed since the same syndicate of oppressors, goons and exploiters have got the representation of PTI, a party which they expectedwould redress their socio-economic grievances and aid them to break the shackles of age-old slavery.

Besides, political cognoscenti particularly and the public generally also raised their eye-brows on declaration of assets by different politicians. They, resorting to utter mendacity, have deliberately shown their undervalued assets that is for sure an antithesis to their lavish life style. Some of them don’t own vehicles while some others are debtors to their siblings and other kith and kins.Isn’t it a joke with the nation? Certainly, it is but who cares; the nonchalance of election commission and other concerned institutions in this regard is also questionable…

Furthermore, the voting turnout has never been impressive in the history of Pakistan. The average voter turnout between the 1970 and 2013 elections has been 47 percent. The highest average voter turnout of 64 percent was recorded during the inaugural 1970 elections. It reflects that nearly half of the eligible voters don’t turn up on polling day to exercise their right of enfranchisement. The principal reason behind this absenteeism is that the absentees regard casting ballot as a futile exercise; because of the belief that one person’s vote cannot affect any considerable difference to the electoral outcome. They, further, contend that the polls pave the way for the same breed of tried and tested politicians that are the embodimentof financial and moral turpitude to the corridors of power.

In the light of above discussion, one can conclude that in for the coming election,for parties, the strategy to win by hook or crook seems to be more important than the evaluation of character of the candidate for nomination. To them, the character does not matter but the ability of the candidate to marshal and manipulate the pollsdoes. This electoral strategy employed by the so-called champions of change to win the election cannot be condoned. “Leadership is a potent combination of strategy and character. “Remarked H.Norman Schwarzkopf “But if you must be without one, be without strategy”. Therefore, whatever the circumstances may be, Character should always be upheld.

The writer belongs to Jafarabad  Balochistan. He writer Lawyer by profession.

Published in The Balochistan Point on July 6, 2018