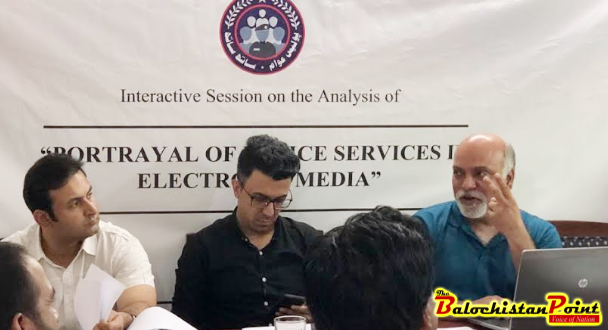 ISLAMABAD: Mishal Pakistan shared the research findings on “Portrayal of Police Services in the Electronic Media” held at the Human Rights Commission of Pakistan (HRCP) today. The workshop was attended by representatives of the leading civil society organizations.

The initiative was organized by Mishal Pakistan in collaboration with the United States Institute of Peace (USIP). Prof. Zafar Iqbal, the research lead on this presented the findings. The workshop also featured a panel discussion followed by an interactive session moderated by Tanzeela Mazhar, General Secretary for South Asian Women in Media, and a seasoned journalist.

Dr. Zafar Iqbal presented his finding about media’s portrayal of the police services and said, “There lies problems at both ends – media as well as the police administration”. He further said, “Media approaches to police on incidents mostly, and, the police management is rather reactive and shies away by not sharing the information accordingly”.

He further added, “On the other hand, police yet could not develop as an institution of national stature with its provincial franchises. Police should establish a central abode to converge its efforts for public outreach and accessibility for perception management at the national and sub-national levels”. On other findings he briefed that, television channels with national reach carry stories on events whereas national level issues are involved; and ignores stories having a human angle or institutional dimension. On the contrary regional channels’ crime beat has been found to be very active. Derogatory language has rarely been used for police in reporting, however, human aspects on police reporting are completely ignored. The gender lens is another ignored area; while incidents of police brutality towards women get prominence, reports on police affairs from Balochistan do not find any space.

It was also concluded by the participants that a lack of media training and understanding on the ethical dimensions of journalism has been considered a primary reason for misreporting on Police related issues in the country as well. This poor state of affairs, however, has never been researched or documented in Pakistan.

Mishal Pakistan in collaboration with United States Institute of Peace (USIP) has taken an initiative to conduct a research on the analysis of Crime and Police reporting in the electronic media in Pakistan. The State of Media Reporting on Police and its related issues have been very limited in Pakistan hence Mishal Pakistan aims to give an overall picture of the conditions on Police reporting in the country.

Tanzeela Mazhar, while moderating the session, shared her views with the participants saying, “While it is important to know that Police services are dynamic and multi-pronged, media’s core responsibility remains to create a mechanism of accountability in the society, and inform their readers and viewers with as many as aspect of a subject that can empower to make informed decisions.” She further elaborated on a well-informed and educated media environment. “Public right to information is violated if media is not generating a well-researched and informed opinion about any department such a as police. Covering police services with its diversity will not only let public know the right forum to access in case of a dispute or emergency, but it will also help evaluate police reform efforts done on different level.”

Puruesh Chaudhary, founder Foresight Lab and Founding President AGAHI commented, “People friendly police is what the law enforcement agencies need to aspire towards; in Pakistan, the institution largely is perceived as one that is professionally inept to deal with the emerging safety needs of the public. This needs to change. Emergency preparedness is at the heart of supporting life and livelihoods.”

Mishal as the country partner of the World Economic Forum (WEF) also works to improve Pakistan’s rankings on the Global Competitiveness Report and the Global Human Capital Report of the WEF. Pakistan currently ranks at 115 among 138 countries, as compared to at 122 in 2016. The Report also indicates reliability of police services in Pakistan ranks at 116 among 137 economies.

Published in The Balochistan Point on July 6, 2018

2018-07-06
admin
Previous: Letter: The problem of increasing accidents on National Highway in Khuzdar
Next: Character does not matter in politics of Pakistan