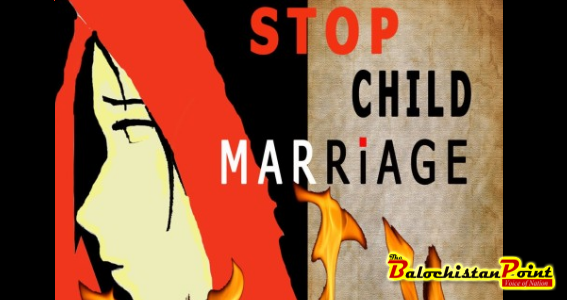 Child Marriages Threaten Lives and Rights of Girls in Balochistan

Our world today believes in the Sustainable Development Goals and their promise to create progress that will improve lives across the world. But when every year young girls are married off, they are ultimately locked away from a better life. Young girls in Balochistan are no exception. Some with great dreams of future and some too young to envisage anything about themselves, are married off.

Child marriage stands as one of the major hindrances in the way of progress not only for the young girls of Balochistan but it may block the way of prosperity of the region as a whole. The world today recognizes the right of every girl to have a say, to have an education and a better life.  Girls are also seen as an important part of the social structure. However, since a larger part of Balochistan’s population is not literate and is unaware of constitutional laws and individual rights, a larger number of young girls are married off before the age of 18. Their young age at marriage makes them vulnerable not only of violation of their rights but also makes them fall victims of honour killing, vacid attacks, complete economic dependence, marital rape, and maternal mortality.

Child marriage is a cycle of disadvantages which begins from denying girls from their most fundamental rights such as to learn, and develop. It also traps their families in a cycle of poverty. Among many other reasons, child marriage is one behind the underdevelopment of Balochistan. True, there are not many opportunities for these girls but if they are protected, and provided with educational and learning opportunities, they may contribute socially and economically for the province rather than falling victim of violence, poverty and early death.

Time and again serious questions are raised against this norm but unfortunately it continues; are females born to have a discouraged life in Balochistan? Don’t they have the right to be educated? Why has government not been able to provide equal opportunities to these young girls?

In a few months, I will still be a child but I will be raising a child.

To have a clear picture of the situation, The Balochistan Point talked to 14-year-old, Maheen, who is married to a man much older than her age. She is 3 months pregnant. She said, “My marriage is a misery for me but I feel blessed to have this baby. In a few months, I will still be a child but I will be raising a child.” Maheen would have led a better life if she was not married off.

In Balochistan approximately 22 percent boys and 63 percent girls are married before the age of 18. Child marriage affects both boys and girls. This also includes children of age 10 to 14. Because of early marriages mortality ratio during pregnancy is high.

Sara, 16, another ambitious young girl from rural Balochistan says “I was interested in education and wanted to become a school teacher but my dreams meant nothing for anyone. I was married before I could raise a voice for my rights”.

There are countless stories of many such girls from all over Balochistan that need attention of the government. Each young girl deserves a better life and it is the responsibility of the government not only to gather statistics of these miseries but to ensure protection of the rights of girls.

Published in The Balochistan Point on April 22, 2018