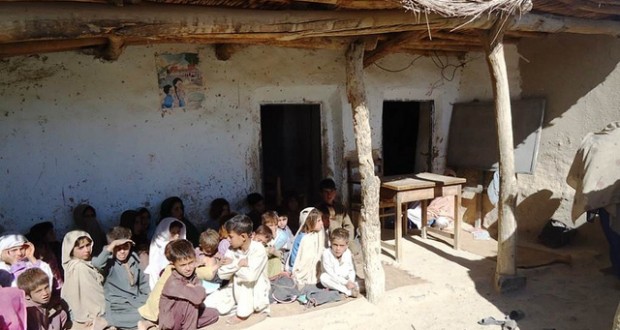 Childhood is the stage of life that is considered as the most splendid period of time of an individual’s life. Worldwide millions of children are deprived of their fundamental rights and privileges. Either challenged by child labor, separated from loved ones, victimized of abuse, starving from hunger, seeking shelter or quality education. Hence, today half of the children through out the world illustrate childhood nothing more than a burden.

Taking a glimpse at the disadvantaged children of Balochistan, we can find that along with lacking most other rights, they are confronted by numerous issues as well. In the midst of the political upraise or religious conflicts, children are the major victims. They might not the ones in most cases who are abducted or killed and dumped. They also not the ones who are struggling or protesting for any right, they are even not the ones who demand for any liberty or employment. They haven’t reached to the phase that they would stipulate any thing but the only thing they desire for is care from their societies.

Inauspiciously, today the children of Balochistan are suffering due to various reasons. They might be the ones who have lost their loved ones; either due to abduction or blasts of conflicts. They might be the ones who walk miles in search of drinking water. They might also be the ones who labor the time they have to spend at school. They might as well be the ones who are a part of the world’s longest march today, holding the photos of their loved ones and walking miles and miles in search of justice. Their innocence presents authenticity of their steps but childhood’s meaning may differ for such children. They can never forget the phase of life in which they beyond doubt had to play with toys but miserably in reality they had to be part of distress, violence and conflicts only.

On the other hand, according to a government survey, today 2.3 million children of the geographically largest province remain out of school. Most of the out of school children either work on daily wages to feed their impoverished families or walk miles in search of drinking water. The children, who had to have pens in little hands, however have to work and remain out of school. Along with education, health is one of the major issues as well. More than 85% areas in Balochistan lack basic health facilities therefore every year thousands of children breathe their last breath due to common epidemic diseases. The little owners of the resourceful province have been facing hurdles with their right to education and have been losing their lives just because of minor epidemics from decades now.

Universally, the most treasured aspiration of mankind is the desire of well-being of own children, and the parents of the children of Balochistan also desire the same. But miserably they never got what they had desired for. Children are assumed to be the futures of nations. Along with being the most valuable resource, they are the best hopes for the future. The recent situations of Balochistan might modify to some extends if the little futures are taken care of, are given all the right, privileges and social security.

Published in The Balochistan Point on January 27, 2014