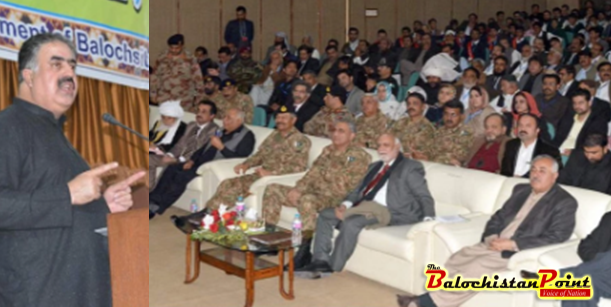 CPEC is a game changer not only for Pakistan but for the entire region:  CM Balochistan

Khuzdar: Chief Minister Balochistan Nawab Sanaullah Khan Zehri on Thursday has said that China Pakistan Economic Corridor (CPEC) is a game changer not only for Pakistan but for the entire region and the elements who were trying to create misunderstanding about it were enemies of CPEC and the masses of Balochistan.

Addressing to a Seminar organized by Devot in collaboration with Commander Southern Command and Government of Balochistan in Balochistan University of Engineering and Technology Khuzdar, Chief Minister said that the Committee of Common Interests (CCI) approved 12 important projects of Balochistan in CPEC during his recent visit to Beijing. He said that following such a success there is propaganda that there was nothing for Balochistan in CPEC which is baseless.

“The roads are as important in the social and economic development of any country as the artery vein which not only reduce the distances but also connect the people.”

He said that Prime Minister Mian Muhammad Nawaz Sharif had special interest in the development of Balochistan and the  PM also announced construction of many other highways in the province which would bring revolutionary changes in the province.

He said “The following the construction of CPEC roads, the second largest city of Balochistan Khuzdar will become the hub of trade activities and the   Industrial Zone has already been approved in Bostan which would benefit the masses as enormous trade and industrial activities will take place in the aea. “

“Khuzdar is the cultural, economic and agricultural centre of the province and his forefathers have rendered huge sacrifices for the region.” Chief Minister said.

He said that the current tribal leaders, political figures and journalists are witness to the fact that how anti-development elements destroyed the peace of this city but, he said, their designs have been frustrated.

He also ensured about further development of  Engineering University and other Universities in the Khuzdar.

Published in The Balochistan Point on January 6, 2017