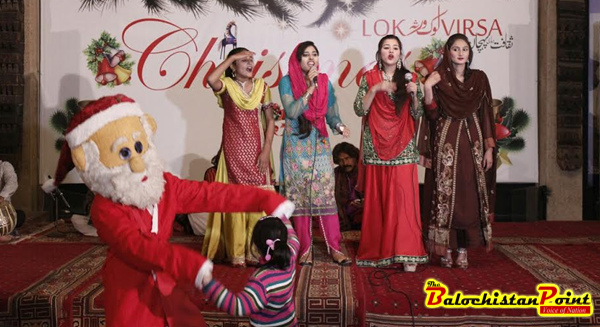 Later he witnessed a special ceremony rendered by Christian community and school children presenting Christmas, national and folk songs. The performances of child stars were greatly commended by the audience.

In his address, the Mayor said thanked Lok Virsa for inviting him in such a colourful event. He said “I think that occasions like this are instrumental in promoting national unity, fraternity and brotherhood among the people of Pakistan. I am heading two organizations MCI and CDA, which are a true example of interfaith unity, are participating in the celebrations of Christmas with our Christian brothers.

He also observed with deep gratification that Lok Virsa is working to promote and project Pakistan cultural heritage of all the provinces, Gilgit Baltistan, Azad Kashmir for which contributions of Lok Virsa is praiseworthy. Lok Virsa has mentioned a few civic problems for which he has directed relevant departments of CDA and MCI to look into these for their rectification.

Dr. Fouzia Saeed while talking to this scribe shed light on the importance of celebrating Christmas through a cultural perspective. She also congratulated Christian community on their auspicious occasion. She said “Christmas is a time for celebration and rejoicing. It is also a time to reflect on the message of Jesus Christ, the eternal message of love, peace and forgiveness”. Highlighting the role of his organization, Dr. Fouzia Saeed added “Lok Virsa is a national institution dealing with Pakistan’s rich cultural heritage. It lives in the hearts of the masses, who are the real bearers of our magnificent cultural heritage. We always plan and present such programs and activities that create love, peace, harmony and solidarity in all classes of society including minorities. The today’s event is a step forward in this direction”.

A large number of people from all walks of life including Christian community attended the ceremony and enjoyed the thrilling performances and presentations rendered by the artists and musicians.

Talking to media, a young Christian boy Unsi told “it is a day of great significance and entertainment and joy for us. Lok Virsa has indeed done a great job to contribute towards Christians”.

Another female Christian girl Gill said “We are proud of our rich culture. It is very diverse. Lok Virsa deserves appreciation for celebrating Christian in such a beautiful manner. The performances were fabulous”.

Published in The Balochistan Point on December 25, 2016