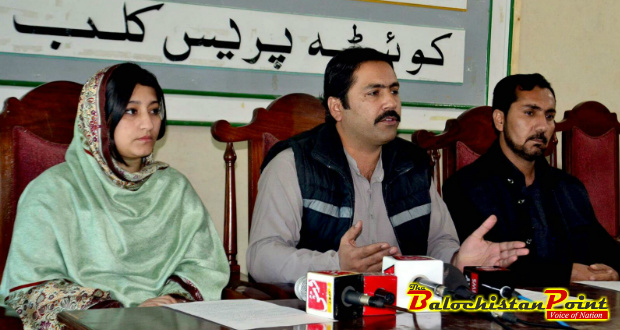 This demand was made by Convener of Civil Society Balochistan, Sami Zarkoon in a press conference held at Quetta Press Club on Saturday. Mr. Zarkoon was flanked by Gul Khan Naseer of Education Network Balochistan and Shazia Langove of National Party.

In that context, Civil Society Balochistan demanded from Balochistan government to form a committee of high ranking bureaucrats or retired educators which would assist the two members of Balochistan in HEC sanction committee.

“Bureaucrats will be free from influence of HEC and they will pursue the matter in a more transparent way,” said speakers at press conference.

Civil Society Balochistan members thanked Secretary Education Balochistan; Abdul Saboor Kakar for taking notice of how HEC is depriving Balochistan after it was published in a Newspaper. “We are thankful to Mr. Saboor Kakar who brought the issue of resource distribution of Balochistan to HEC officials,” said Mr. Zarkoon.

It was stated in the press conference that HEC is violating the Article 37(A) of Pakistan’s Constitution which reads, “Promote, with special care, the educational and economic interests of backward classes or areas.”

Civil Society Balochistan warned that they can exercise different options including protest demonstrations if government did not take action based on their demands.

2016-01-17
Editor
Previous: Defective Public Sector Development Paradigm in Balochistan
Next: Editorial: A War against Noble Cause