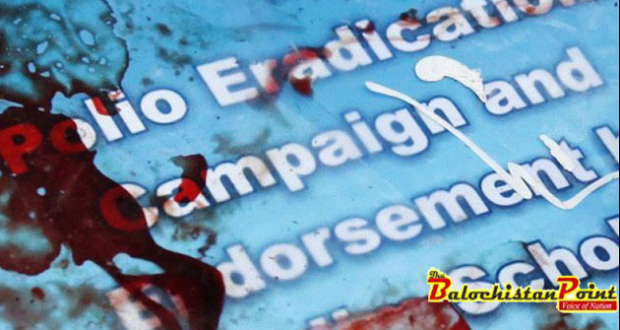 Editorial: A War against Noble Cause

Apart from number of reasons, assaults on Polio teams and their escorts has become the chief cause making Polio unbeatable in Pakistan. The religious militants have started a war against this noble cause and till today dozens of precious lives have been lost.

Recently, once again Balochistan shocked when a suicide attack close to a polio vaccination center in capital city of Balochistan on Wednesday killed 16 people and injured some 25, mainly policemen who had gathered to escort health workers.  The security forces were the primary target of Wednesday’s attack, the bombing happened outside the polio center shortly before vaccination teams were due to be sent to local neighborhoods as part of a three-day immunization campaign. Following the blast the three day campaign in Quetta was temporarily suspended.  It was the third day of a three-day anti-polio campaign launched in Quetta and other districts of Balochistan on Monday.

Pakistan is among the countries in the world where polio is endemic and the attacks on the vaccination teams are marked a great menace. However, some Pakistanis are counted as refusal fearing that it will sterilize their children. The attacks increased after a Pakistani doctor was arrested on charges of running a fake hepatitis vaccination campaign in the city of Abbottabad as a cover for a CIA-backed effort to obtain DNA samples from Osama bin Laden in  2011.

Since 2012, increased attacks have been observed on Polio workers in Balochistan.  The recent attack was one of the most deadly assaults. In the past attacks all the vaccinators were locals of Balochistan, who were serving to eradicate Polio, receiving minimum wages as Rs. 250.

Polio is becoming unbeatable in Pakistan due to refusals and religious extremists. Since one hand Society is not cooperative in campaigns against eradication, on the other hand not only religious elements oppose dropping and consider conspiracy against Muslims but also the militant groups carry on attacks on the polio workers. It is also alarming that World Health Organization (WHO) and United Nation Children Fund (UNCIEF)   are not contented with vaccines in Pakistan and staff performance in the remote areas of Balochistan and in other provinces.

The attacks on Polio workers and their escort by religious militants is condemnable such terrifying moves should not be left to deter noble cause against Polio.  Most of the attacks have been taking place in Quetta in Afghan refugees populated areas who are also blamed to be the biggest cause of lawlessness and terrorism in the country’s largest province.

The government has to impede moves against disabling children sine the stoppage of vaccination in any area will cause disability in children. Thus, government should make tangible measures to cope with this burning issue by taking action against   perpetrators involved in killing volunteers, medical staff and their bodyguards. In addition, the political activists, media, teachers, religious leaders    and civil society organizations should continue education against Polio in their communities.

Published in The Balochistan Point on January 17, 2016