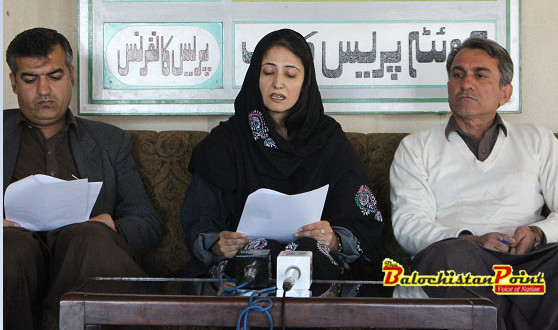 Quetta: The Civil Society Working Group (CSWG) Balochistan welcomes EU’s awarded GSP + Status to Pakistan for sustainable development and good governance. In this connection, governments’ efforts for the improvement of country’s economy and human rights reforms are appreciated. These comments were made by the leadership of Civil Society Working Group – Balochistan in a joint press conference at Quetta Press Club on Monday.

“The civil society believes that compliance to 27 international conventions, associated to GSP+ conditionalities, has a potential to transform entire lifecycle of citizens of Pakistan; it involves socioeconomic empowerment of women, accession of children’s rights, labour rights, civil liberties, fundamental freedoms, mainstreaming of minorities and ensured political participation.” They offered their full cooperation to maintain GSP+ status.

They said that EU’s periodic review on GSP+ was underway in January 2016 that was to share that CSWG Balochistan had submitted its preliminary report to the EU highlighting key human rights issues generally prevalent in Pakistan and particularly in Balochistan.

“The report has been well received and recognized by the EU Mission in Islamabad.” They claimed.

Civil society in realization to its responsibilities   highlighted the following  set of concerns regarding the status of rights and compliance to GSP+ treaties in Balochistan:

“It is a matter of fact that above mentioned figures are indicative of worsened human rights situation in the province which is due to weak legislation and inadequate institutional arrangements.” They stressed

“The Government of Pakistan must speed up the implementation of rights, through legislation, institution-building and democratic engagement. Pakistan will only reap the fruits of democracy if the fundamental human rights, in addition to good governance, are accessible for citizens in their daily lives.”  They added

The Government of Pakistan is required to take steps for the withdrawal of reservations posed on international conventions including the ICCPR, ICESCR and CEDAW and bring policies and laws in conformity with international human rights framework. In addition to this, efficient administrative arrangements are required to ensure implementation on the laws. The federal government needs to take the lead in pursuing this objective, so that the provinces can follow suit.

Previous practices reveal that Pakistan had flexibly ratified numerous UN Treaties and ILO Conventions only for the sake of image building at the international level. The state exhibited a lax attitude both at compliance and reporting and got away with it because of the absence of binding restrictions on non-compliant countries.

The Civil Society Working Group (CSWG) on GSP+ , represents major civil society organisations of Balochistan, was established following a round-table on “Civil Society’s Role in GSP+ Monitoring and Compliance” organized by Democracy Reporting International (DRI) in April 2015, in Peshawar. The main objective of the group is to monitor the compliance on Pakistan’s international human rights commitments and engage with stakeholders, including the Government of Pakistan, on key reforms required to meet the GSP+ conditionality.

2016-01-25
admin
Previous: Charsada Attack and The Pashtun Question
Next: Plight of Hindus in Balochistan