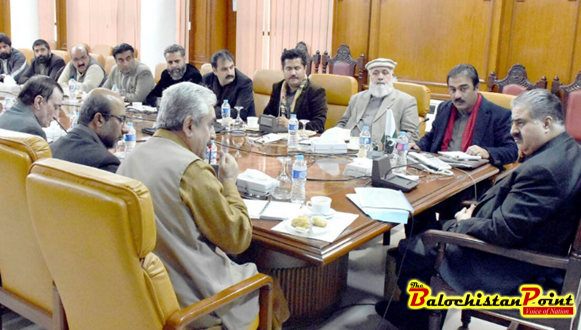 Quetta: Pledging to fully support Non- Governmental Organizations (NGOs) working for the promotion of education and health sectors in the province, Chief Minister Balochistan, Nawab Sanaullah khan Zehri has said that government viewed such NGOs working for the welfare with great respect and reverence.

He was talking to delegation of Muslim Hands Pakistan headed by his President Mr. Syed Bakht Hassnain who called on him here on Thursday at Chief Minister’s secretariat.

President Muslims Hands Pakistan briefing the Chief Minister about welfare services and performance of his organization said that Muslim Hands has had branches in 50 countries in which more than 2500 employees were working. He said that his organization besides carrying out relief activities during natural calamity also works for the promotion of education and health. He said that Muslim Hands intended to establish a state of the art school and college in Quetta where boys and girls would be imparted modern education along with Islamic education, and requested Chief Minister for provision of land in this regard. He also informed that Muslim Hands would provide latest machinery to government of Balochistan for diagnosing Cancer and treatment of patients, adding that Muslim Hands would also provide support in health and educational sectors to fulfill the missing facilities in these sectors identified by government.

Nawab Zehri said that he would himself supervise and monitor the all welfare works so that their benefits could reach to the deserving and needy people.

In the meeting, matters regarding curbing use of drugs and treatment and revival of addicts and steps for their welfare were also discussed.

Chief Minister said that strict steps had been taken for the prevention of drugs and smoking Shisha in all educational institutions and a full campaign would be kicked off to protect our new young general from this curse.

Chief Minister accepted the invitation of president of Muslim Hands and assured that he would soon visit England.

Published in The Balochistan Point on January 12, 2017