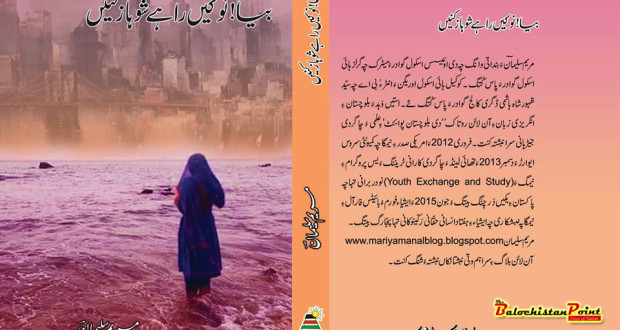 Quetta: “Come! Let’s Discover a New Way” or “Bya! Noken Rah e Shohaz kane”, authored by young female writer Mariyam Suleman has been published by Balochi Academy. The book is fictious travelogue based on a true story of sixteen year-old Baloch girl traveling to the Oregon state of the US as a high school cultural exchange student.

Mariyam Suleman, is young social activist and writer from Gwadar Balochistan. She is well known for writing in Balochi and English.  Currently she is affiliated with Balochistan Point as a staff writer, focusing on Balochi literature, social and human rights issues of Balochistan. She has been the first youth group director for Pak-US Alumni Network Gwadar and has volunteered for several social organizations in Balochistan.

Mariyam participated in YES (Youth Exchange and Study) program from 2011-12. YES is funded by the U.S. Department of State. It provides scholarships for secondary school students (age 15-17) from countries with significant Muslim populations to spend one academic year in the United States.

Opposite Koh-Meedi, in the out skirts of Gwadar town, beneath the shade of a tree one evening in the summer of 2011, she tries to figure out ways to realize those small dreams she untangled in her diary ever since she was a little girl.

Although the travelogue is a true story, yet in the book it is penned down as an imaginative narrative that takes place entirely in a dream. The main character or the exchange student is named as “Manal”, the name which means a strong ambition or desire.

Within the book for the most part she either writes what she experiences in her diary or has long conversations about society, culture, religion and innovation with the people around her.

Her experiences lend a hand for putting together the missing parts of the jigsaw puzzle, she often had in her mind about the persisting issues of her home region and help her interlink every piece of the puzzle with the other after analyzing the reasons behind the issues but remains mystified with the big picture the puzzle turns out to be by the end in the summer of 2012.

With a stiff ray of hope that things might get better someday, she aspires to continue her travel even after the exchange year which she assumed would merely be a dream but in actual it proved to be more than a reality.

Published in The Balochistan Point on March 27, 2016