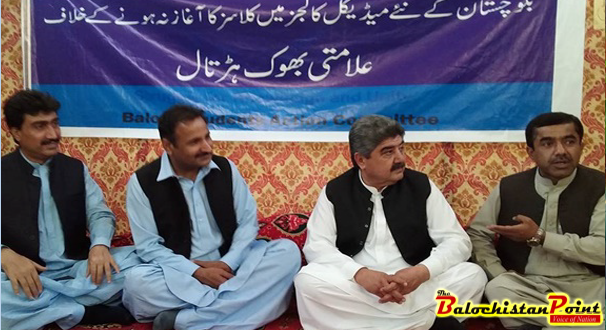 Committee constituted for beginning of classes in new medical colleges

The constituted committee will be headed by additional secretary health Abdul Rauf Baloch whereas  the central chairman BSAC Rasheed Kareem Baloch,  Siraj Baloch,  Dr Asif  Shahwani And Mujeeb Baloch From Baloch Doctors Forum,  Hafeez Mandokhail  and Dr Baktiyar Baloch from Young Doctors association Kamalan Gichki from PMA have been added as  member of the committee. The will see the progress of new Medical Colleges in Balochistan.

A hunger strike camp has been setup Baloch Students Action Committee (BSAC) for more than a week in front of Quetta Press Club for making the new medical colleges functional.

During media briefing Rasheed Kareem Baloch expressed deep thanks to the secretary and additional secretary for their efforts and said that camp would continue until summary of new Medical Colleges is passed. They extended their thanks to the people who unconditionally supported them.

Published in The Balochistan Point on April 19, 2017