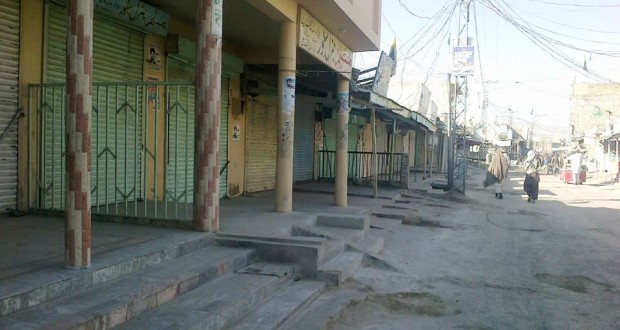 Quetta :  A complete shut off was observed in several cities of Balochistan.  The Baloch Warna Movement (BWM)  had called call for the shutter down against the threats given to Mama Qadeer Baloch, Banuk Farzana Baloch and other marchers of Voice for Missing Baloch Persons (VBMP) allegedly by security agencies.

According to BWM Mama Qadeer Baloch and his companions are being threatened to death by  secret state agencies and are being pressurized to hold back the long march.

BWM had given the call for strike on Tuesday 21st January and requested to observe strike in major cities of Balochistans including Tubat, Gawadr, Panjgoor, Hub, Khuzdar,Noshky, Kharan, Mastung, Kalat, Dalbanden, Naal, Tump, Boleda and Besema.

The Voice for Baloch Missing Persons (VBMP) had started a peaceful march of 750KM from Quetta to Karachi on 27th October 2013 for the safe recovery of 18000 missing Baloch persons. After a short interval they resumed March from Karachi to Islamabad, a walk of 1500KMs. The marchers include elderly Qadeer Baloch, women, children and relatives of missing persons.

Published in The Balochistan Point on January 22, 2014

2014-01-22
admin
Previous: Quetta: Mourning families of Mastung blast stage sit-in along with dead bodies
Next: A warning to Dr Malik