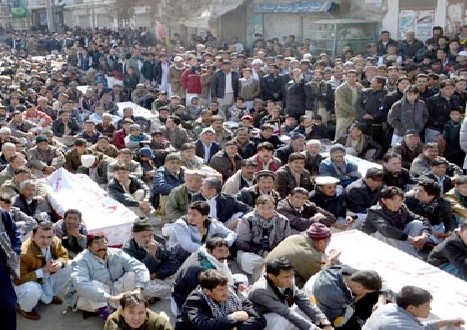 QUETTA: Family members, whose loved ones were killed on Tuesday’s suicide bombing near Mastung, staged a sit-in on Alamdar Road in Quetta against the incident on Wednesday.

According to the details, a large number of heirs of those killed in the blast placed dead bodies of their 15 beloved ones on road on  Alamdar Chowk in Quetta and staged sit-in. The relatives of the victims have refused to bury the dead bodies calling for the arrest of culprits. The pilgrims bus was coming from Taftan area of Iran , when it caught fire after a powerful  blast inn Dringarh area of Mastung, leving 25 persons dead and over 39 injured.

The protesters chanted slogans against government and threatened to surround the Chief Minister House and Governors’ House if authorities failed to bring the miscreant to book.

Banned militant outfit, Lashkar-e-Jhangvi, claimed responsibility of the blast. It said that the blast was caused by a suicide bomber who rammed his explosives-laden vehicle with the bus.

Shia organizations have called for country-wide protests and also called for strike in Balochistan today against the incident. “Balochistan Shia Conference has decided to stage indefinite sit-in and demanded army operation against banned outfits.” Media reported

Published in The Balochistan Point on January 22, 2014