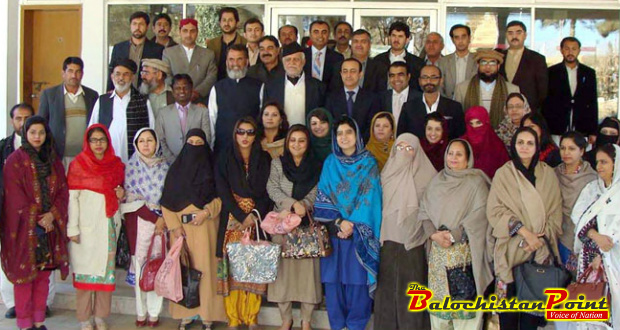 Coordination among Legislators of all Provinces Urged In Multi-Party Summit

Quetta – Participants of Balochistan Multi-Party Summit have urged the need for coordination between legislators of all provincial assemblies in Pakistan, on Tuesday.

Two-day Balochistan multi-party summit was jointly organized by Democracy Reporting International (DRI) and Balochistan Provincial Assembly. The multi-party summits, which will be held in all four provinces, are part of DRI’s initiative to facilitate inter-provincial and multi-party dialogue on civil and political rights of women, youth and minorities.

Concluding session of Balochistan Multiparty summit was held in committee room of Balochistan assembly with speaker Rahila Durrani on chair, on Tuesday. Session was attended by Chief Minister of Balochistan Nawab Sanaullah Zehri, sixteen Members of Provincial Assembles (MPAs) from Punjab, Sindh and Khyber Pakhtunkhwa (KP) along with MPAs of Balochistan Assembly.

Speakers at the session jointly agreed that coordination of MPAs of all four provinces on legislative matters is need of the hour and a mechanism should be developed to make it possible.

Addressing the participants, Speaker Balochistan Assembly said that primarily it is responsibility of all four provincial assemblies to hold such multi-party summits. “Exchange visits of MPAs should continue as they provide opportunity to parliamentarians to get exposure of parliamentary business of sister assemblies and strengthen inter-provincial harmony, she added.

Rahila Durrani stressed on the need for making Women Caucus functional in four provincial assemblies so that a proper platform is made available to highlight the issues related to women for legislative and policy level changes.

MPA of PML-Functional from Sindh, Nusrat Sehar Abbasi, said that women should be given place in decision making bodies as they have proved their capabilities in all national and provincial assemblies.

Naila Munir of MQM said that government and civil society needs to ensure that women should vote and exercise their democratic right.

Dr. Lal Chand, minority MPA of PPP from Sindh, lamented forceful conversion of women of minority and urged participants to work for legislation to prevent such mishaps.

Vickas Mokal, MPA of PML-Q from Punjab, suggested Balochistan Assembly should also consider formation of youth caucus as it is need of the hour.

Hassan Nasir Mirbahar, DRI Team Leader, said that the summits were aimed at bringing parliamentarians together to work on civil and political rights as it was important that political parties worked together beyond party lines on important issues.

Earlier in the morning, visiting MPAs met with Joint Working Group (JWG) of Balochistan Parliamentarians and Civil Society which is headed by Dr. Shama Ishaque of National Party.

Speaking at the occasion, Dr. Shama Ishaque said that members of the group were considering specific legislative actions to improve political participation of women, youth and minorities. “This group is a first of its type in Pakistan where parliamentarians are working together on rights issues, Convener of JWG claimed.

Balochistan summit concluded on Tuesday and future multi-party summits would be held in Peshawar and Karachi.

Published in The Balochistan Point on January 13, 2016

2016-01-13
Editor
Previous: Letter: Problems Faced by People of Gwadar
Next: Interference of BNP in BSO Elections