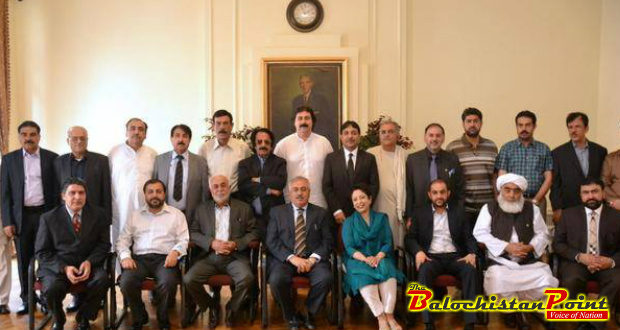 After the 18th Amendment to the Constitution and the 7th NFC award, the resources of Balochistan have been looted by a new elite class comprising of the members of the provincial assembly. The previous Balochistan Assembly, from 2008 to 2013, embezzled Rs 360 billion from the provincial exchequer, as per reports. At one time 61 out of 65 members of the assembly were ministers, advisors or parliamentary secretaries. Unfortunately, the current Balochistan Assembly, despite its better public image, is not different from its predecessor.

A 34 member delegation of the Balochistan Assembly is leaving for USA to take part in a freedom rally. This delegation comprises of provincial assembly members from both opposition and government benches and some bureaucrats as well. According to a source within the Assembly almost Rs. 100 million will be spent on this trip.

How can you justify wasting Rs. 100 million in a province where 52% people live below the poverty line and 63% people don’t have food security? Even if it’s necessary to represent Balochistan in freedom rally in USA, a couple of members form Balochistan would have sufficed. However, a delegation of 34 members proves that the basic aim of the visitors is sightseeing in the US at the expense of taxpayers’ money. This move will not be criticized because opposition members have also been accommodated in this delegation.

The performance of the current Balochistan Assembly can further be gauged using the report titled “Score Card” issued by PILDAT. This report analyzes the performance of Balochistan Assembly in its second parliamentary year from June 1 2014 to May 31 2015. According to the report the overall attendance of the Assembly was just 58%. It only managed to pass 16 bills in the second year, a 36% decrease on last year. Among these 16 bills, three were related to increasing the perks and privileges of the Assembly members.

The Balochistan Assembly failed to make any noteworthy legislation related to all those subjects which were transferred to provinces after the abolition of the Concurrent List following the 18th Amendment. Standing Committees in Balochistan have not been made functional even after passing of two parliamentary years. The nominated chairman of Public Accounts Committee (PAC) is a government member and cousin of Mehmood Khan Achakzai, which is negation of the democratic norm that the PAC chairman should be an opposition member.

Moreover, Balochistan is the only province in Pakistan where members of assembly get development funds worth hundreds of millions per year. Members can utilize these funds, as per their discretion, in their constituencies. Incumbent Assembly has completed two years and approximately Rs. 200 to 300 million has been issued to per member, per year, as development funds. However, one can see no development work at ground except some showpiece projects. Now, where is this mammoth amount of money going? The answer is simple: in the pockets of Assembly members and their partners in crimes; the bureaucrats and contractors.

There is no doubt that the last Balochistan Assembly was the most corrupt in the province’s history. However, not a single member of that assembly has been implicated in any corruption case by the National Accountability Bureau (NAB). Some references have been filed against a few members but progress on those references is almost zero. It’s believed that NAB is almost nonfunctional in Balochistan and a few of the references that it files are mere formality.

Members of the incumbent Balochistan Assembly consider themselves to be invincible and answerable to none. They derive this artificial sense from the claim that they are representatives of people of Balochistan. If truth be told, they aren’t. This Assembly is not genuine representative of Balochistan. In fact, it’s a product of what’s called “Transparent Fair and Free Selection.” The Judicial Commission that probed election riggings ignored Balochistan, despite abundance of evidence, because terms of references of that commission were not Balochistan-centric. Therefore, a non-representative Assembly of Balochistan is looting the provincial exchequer and it is adding insult to the injury.

At the moment, the National Action Plan is in full swing in Pakistan, courtesy of General Raheel Sharif. A new term ‘Economic Terrorism’ has been coined and action is being taking against those involved in it. Sindh in general and Karachi in particular is the center stage of action against economic terrorism. Former President Asif Zardari has left the country fearing arrest under anti-economic terrorism drive. MQM is also on the defensive and a lot of previously unfathomable events are transpiring. However, there is no sign whatsoever that the economic terrorism carried out by former and current members of Balochistan Assembly will also be targeted. It’s further proved by the fact that Nawab Aslam Raisani, the most corrupt chief minister in the history of Balochistan, freely shuttles between Quetta and Islamabad and he has not even harbored the thought of fleeing the country.

Nawab Aslam Raisani, the most corrupt chief minister in the history of Balochistan, has not even harbored the thought of fleeing the country

The Balochistan problem is multi-pronged. The corrupt Assembly is not the only reason that Balochistan faces its myriad problems. However, they are blamed much less than their due share. The action against the elite class of Balochistan, sitting in assemblies, is imperative if Balochistan’s problems are to be sorted out.

Author’s Note: Not all members of Balochistan assembly are corrupt but majority of them indeed are.

Published in The Balochistan Point on August 30, 2015

Corruption 2015-08-30
Editor
Previous: Intellectuals and Their Role in Development
Next: Letter: Journalists Safety