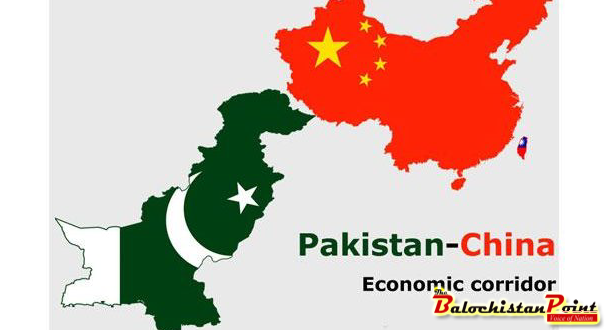 CPEC: A way to conflicts in Pakistan

Plans for Pakistan-China Economic Cooperation (CPEC) in strategic spheres appear to have developed in the mid-2000s with the proposal to create an Economic Corridor from Gwadar in Balochistan to Kashgar in the Western Chinese province of Sinkiang. Two necessary conditions of the Corridor were and are development of the port at Gwadar and creating surface transport connectivity between Gwadar and Kashgar. They are absolutely necessary because without the port and without the transport connectivity, no other economic activity with respect to the Corridor can be possible.

The main substance of the Corridor is the Gwadar port and the Gwadar-Kashgar highway. The map, which carries the Planning Commission logo, can be considered the first official identification of the route planned for the Economic Corridor. The route on the map corresponds with the route now being referred to by the federal government as the central route.

There is a penalty of controversies on the root among the people of Pakistan from different regions. The central root  of the project depends on the different regions such as Gwadar,  Turbat ,Panjgur Khuzdar, Ratodero, Kashmore, Rajanpur, Dera Ghazi Khan-Dera Ismail Khan, Bannu, Kohat, Peshawar, Hasanabdal and onwards. However, due to the controversies the second route offered by the federal government depends on Gwadar, Turbat, Panjgur, Khuzdar, Ratodero, Kashmore, Rajanpur, Dera Ghazi Khan, Multan, Faisalabad, Pindi Bhatian, Rawalpindi-Hasanabdaland onwards.  Secondly the people, leaders, politicians, religious scholar and military of Pakistan use the project in different ways viz every one trying to secure a piece of land for them. Some of the people kept then name of this project as imperialistic slavery.

According to this project there will be hope for good roads and railway tracks from Pakistan to China. These roads will cover the areas on which the transport will be continued. Including Karachi Lahore motorway, Karakaram highway etc.The work also includes the new airport in Gwadar which make the sea port able for all these actions. As we all know that China is the second economically power full country of the world and Pakistan is also the eleventh nuclear power of the world. Here a question is raised that rather this project will be advantageous for these two countries or not? If we know about the internal circumstances of these two countries according to a report China with economic power has 92 crore it is also having great challenges poverty and unemployment. Side by side Pakistan also surviving a great number of employment and also number of people from Punjab and the other region trying to change their nationalities.

The project helps in different fields e.g. political economy trade, infra-structure, employment, cultural change, social interaction, and education. If we talk about political economy it helps in sense that a road creates connectivity and opens up markets for local produce and provides access for education medical care and socialization.

As such the route that a road alignment takes talks benefits upon the people of the area to the exclusion of those away from the alignment. Pulls and pressures with regard to the arrangement are therefore understandable. Lack of access to markets and to employment, educational, health and socialization opportunities in some areas defines as regional inequality and in most cases constitutes the basis of disaffection and insurgency creating conditions for higher security costs.

It also help in shape of energy from the total budget of $46 billion, $35 billion dollars will be spent on the energy sector of Pakistan while the $11 billion is reserved for the infrastructure. Currently Pakistan faces a massive energy shortfall of 4,500 Mega Watt (MW). However it is expected that with the support of projects under the umbrella of CPEC energy shortfall will be overcome since Pakistan might be able to produce 10,400 MW of electricity by March 2018 and overall the CPEC project is believed to produce a total of 16,400 MW by the time all projects are finished.25 Energy sector of Pakistan is often criticized and is considered as a reason behind the failure of industry in Pakistan and also why other foreign investors hesitate to build or shift their industry here. But hopefully the energy produced by all these projects will be enough to overcome the shortfall which will allow the industries to thrive and Pakistan would be able to welcome more foreign investment. The table below analyzes the priority energy projects in detail and they are expected to be completed by 2018.

Published in The Balochistan Point on April 16, 2017

2017-04-16
admin
Previous: Letter: CPEC and Balochistan
Next: The Fault in Our Foreign Policy