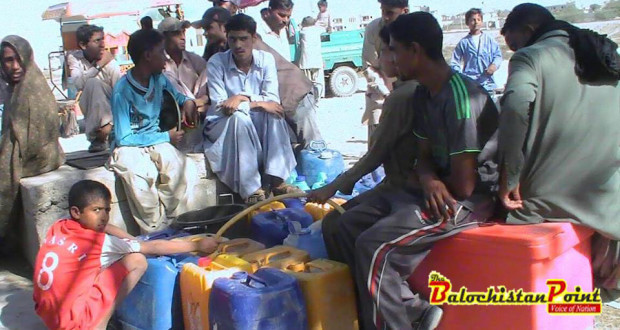 The recent inauguration of groundbreaking projects of China-Pakistan Economic Corridor (CPEC) in Balochistan by Prime Minister of Pakistan and the severe crisis of water in Gwadar and lack of   basic facilities of life mirror a very pathetic state of Baloch as well as the systemized discrimination of Islamabad against Balochistan lasting for decades.

Recently, while addressing at the inauguration ceremony the western route of the China-Pakistan Economic Corridor (CPEC)  the $46 billion project, Prime Minister of Pakistan believed in the first right of  Balochistan  over the resources  being  explored in  Balochistan. He said that development projects were the top most agenda of the government and the era of prosperity in the country would begin with the completion of these projects in Balochistan.

The inauguration ceremony was of the western route of the China Pakistan Economic Corridor (CPEC) in Balochistan’s Zhob distric. The Zhob-Mughal Kot Section is part of the western route of the CPEC which starts from Burhan on the Peshawar-Islamabad motorway (M-1), and after moving through DI Khan, Zhob, Quetta, Surab and Hoshab, ends at Gwadar. The CPEC is a 3,000-kilometer network of roads, railways and pipelines to transport oil and gas from Gwadar Port to Kashgar city, northwestern China’s Xinjiang Uygur autonomous region.

Apart from setting strategic framework for increasing cooperation between China and Pakistan CPEC is claimed to contribute in the development and prosperity of the whole region. According to the Chinese experts and media, The CPEC will reduce China’s routes of oil and gas imports from Africa and the Middle East by thousands of kilometers, making Gwadar a likely crucial connection in China’s supply chain.

Unquestionably, Gwadar is the starting point of the CPEC, where more than $1 billion worth of projects have been planned around the port of Gwadar by December 2017.   China has agreed to grant Pakistan $230 million so as to construct a new international airport in Gwadar   which is to be operational in coming three years. As well as the projects of $800 million including the construction of a 300MW coal power plant in Gwadar, a desalinization plant, a new well facilitated hospital with 300 beds, and an expressway along Gwadar’s East Bay. Pakistan has also shown its interest to establishment of a skills training institute at Gwadar, titled as Pak-China Technical and Vocational Institute to enhance the skills required for operating   Gwadar Port at the cost of 943 million rupees.

The importance of Gwadar in region and in China Pakistan Economic Corridor (CPEC) is lucid; conversely, despite being an important point of the China-Pakistan Economic Corridor, the population of Gwadar has been confronting shortage of drinking water due to the drying up of Ankara Dam, which is the main source of supplying water for drinking purpose.

The inhabitants of Gwadar are compelled to buy water at high rates between the price of Rs 9000 and Rs 12000, which is not affordable for poor population in Gwadar. Though, the Secretary Public Health Engineering (PHE) recently claimed the commencement of supplying water to the people through water tankers to cope  with the  problem by providing 100 tankers per day  to the  population of around 90,000,with the funds provided by the provincial government, however, according to the local sources  even no more than 40 tankers have been arranged. Even, the local residents blame that water supply is being done on the basis of favoritism and nepotism.

Despite knowing the strategic importance and the beginning point of the CPEC, The federation has failed to ensure provision of basic facilities of life to the people of Gwadar. In which   the chief one is supply of clean drinking water for the local residents, where a water tank costs 9000 or more and Gwadar desalination plant has been proved of no use. The recent house robbery in Gwadar, where the robbers whisked away water containers not only marks the scarcity of water in Gwadar but also shows how government ignores the main point of CPEC.

On the one hand CPEC is claimed to be game changer and change kismet of Balochistan, on the other hand, no efforts by Sino and Pakistan for provision of basic facilities to population increase sense of deprivation in Gwadar and Balochistan. In the very beginning of this project fishermen of Gwadar have been deprived of their fishing site the main sources of income destroyed by the government as well as a ban has been imposed on right of expression for not holing any demonstration and procession by any political organization  or civil society organization.

Making the first move as confidence building measure Government and Sino can win the confidence of people in Gwadar and Balochistan, by establishing desalinization plants and provision of basic facilities of life. Otherwise, Chinese projects in Balochistan, mainly, Gold project in Saindak and World Largest Gold and Copper Mine   project in Reko Diq area of Balochistan are enough to justify hopelessness of Baloch.

Yousaf Ajab Baloch is a journalist and human rights defender. He is editor-in-chief of The Balochistan Point, Follow Yousaf on Twitter @YousafAjab.

2016-01-21
admin
Previous: Balochistan Conundrum in Backdrop of CPEC
Next: Jaffarabad: 90% of Education Development Budget Not Released Yet