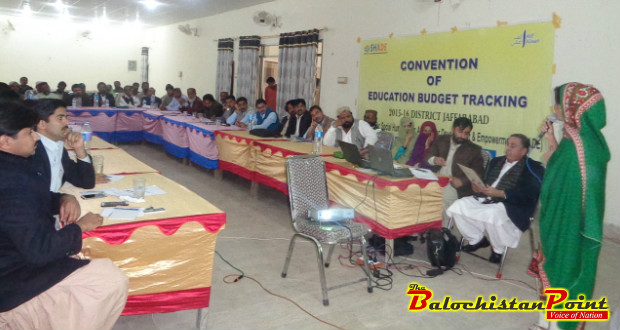 Jaffarabad: 90% of Education Development Budget Not Released Yet

Jaffarabad: After 7 months of passing of fiscal year 2015-16, 90% of education development budget of Jaffarabad district has not been released yet.

This was revealed in a budget tracking convention held under the auspices of Alif Ailan and SHADE to discuss the spending of district education budget and highlighting the hurdles in the release of funds, on Thursday.

A total Education development budget of Rs. 239 Million was allocated to the district Jaffarabad but only Rs. 20 Million have been released  so far, which is less than 10 percent.

Former Federal Minister for Science and technology, Changez Jamali urged the development budget should be released on time. He further said that has taken responsibility of 10 schools and had held different meetings with Secretary Education in this regard.

Alif Ailaan’ Coordinator Miss Hameeda Noor told the audience that 58% Children are out of school, 99% Schools in the district have no toilets and enrolment rate in high schools stand at mere 11%. “Slow release of funds was considered to be a hurdle which has been affecting the development in district,” Miss nor added

She requested to do work on budget tracking and push for the utilization of every single penny for the development of education.

Participants of the meeting appreciated Alif Ailan and SHADE for highlighting issues of Jaffarabad.