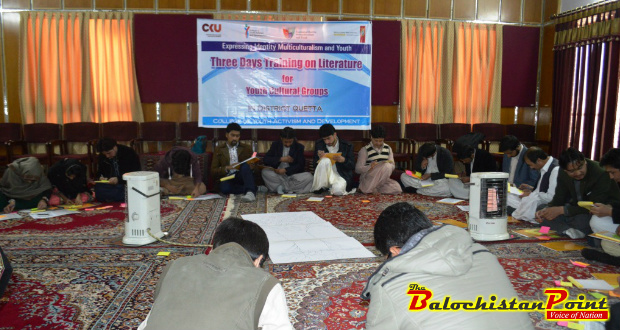 Quetta: Three days training workshop was held in Quetta on the theme of “Training on Literature for youth Cultural groups in which male and female poets and authors participated.

Professor Khalil Bawar, Professor Barkat Shah Kakar and Mr. Jan Mohammed and Sultan Zakhpail facilitated participants about different forms of literature like poetry, fiction, novel, drama and article writing. They encouraged energetic youth to work on their mother language literature and take up their pen and write about their history

Mr. Raziq Faheem Chief Executive Officer CYAAD also shared his views about importance of literature and culture and its outreach in Balochistan. He also oriented participants about background of the organizations and scope of the project which will be implemented in five districts of Balochistan.

Mr. Gul Sher Baloch a participant of this workshop told Balochistan Point that such workshops are very fruitful for the youth brimming with energy.

Mr. Gul further added we have got a lot of misconceptions in our society; it was good time to remove such kind of myths. We got closer to other communities knew their ideas, their problems and their courage to resolve all the problems and diminish all prevailing misconceptions.

Mr. Roger Andria’s added that it is a great opportunity for me to know about different cultures and mother languages. I have got more information about them. It connected me with the broad minded persons which is a great goal.

Youth also wrote poetry, columns and stories through various activities then with other participants of workshop on last day.

Published in The Balochistan Point on January 22, 2016

2016-01-22
Editor
Previous: Jaffarabad: 90% of Education Development Budget Not Released Yet
Next: Do We Need New Social Contract?