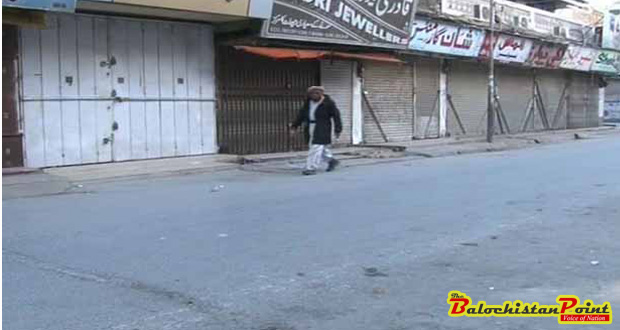 Quetta – Complete shutter down strike was observed in Quetta city against alleged changes in route of China-Pak Economic Corridor (CPEC), on Wednesday.

Strike was observed to protest the change in route of CPEC which has allegedly been shifted to east ignoring Balochistan and Khyber Pakhtunkhwa (KP).

All markets in Quetta city were closed and strike was termed very successful by the parties who had called for it.

Chief Minister of Balochistan, Dr. Abdul Malik, told the protestors yesterday that he is also not sure about the route of CPEC. He said that Federal Minister for Planning and Development, Ahsan Iqbal, would be invited to Quetta to elaborate the issue of change in route of CPEC.

Leaders of ANP and JUI termed changes in route of CPEC, ‘economic murder’ of two eastern provinces. ANP has called an All Parties Conference against route change of CPEC in Quetta on 16th May.

Published in The Balochistan Point on May 6, 2015