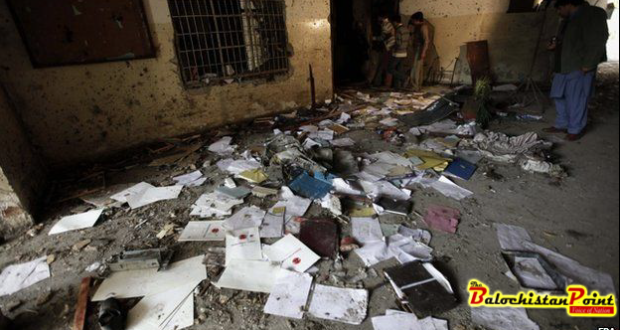 Crumbling Education System under the Shadow of Terrorism

Education always over shades the curse of crime to provide enlightened horizons for excellence of future, where students are the building blocks of any nation. Miserably, numerous children are still out of schools but it is mentioned in article 25-A, in the constitution of Pakistan that government must provide  free and compulsory education to the masses of the nation, however,  but the article is not imposed properly yet. In different cities students are compelled to sit in open sky and attend their classes.

On the one hand education is being neglected on other hand the smacks of terrorism are growing a catastrophic fear in outskirt of educational institutes. The attack son Army Public School, Charsada University and Sardar Badur Khan University are the worst examples. Lack of interest of concerned authorties on schooling system seems to be very abortive.

The grip of terrorists in the soil, subversive activities against pupils have clogged all ways of learning. Education has become a gigantic sin in the Islamic country and odious activities of wrongdoers dreamed to eliminate education system and its root from the country. There is no realistic hope and stable halcyon in the state.

Nation must decide to cherry-pick two options, the first, is to be remained silent , and then be killed,  second one is to speak up and then be killed. It is pertinent to select second option because the state has completely failed to maintain peace.    Terrorism has jolted the system of education and filled with horror and rancor. The successful attacks boggled whole nation because it threw off the shackles of human violence. For instance, as Islam highlights that killing of innocent is equal to killing of all humanity. In addition to this, the silver-bullet imbroglios of education need a mountainous and vigorous step towards the flawless future of pupils.

Currently, education is threatened and rays of terrorism are going to demolish. Importantly, it is necessary to foster unity and join hands together to work day and night for schooling system. So, we must pursue on Islamic teachings and eliminate prejudices among folks  and must struggle for pioneering of education. It is salient step to root out the bridge of hate and envy, and provide standard educational facilities and safety environment to our pupils. Further, education must be first priority of the state authorities since with the help of education the wheel of progress can come on track.

Published in The Balochistan Point on March 13, 2016