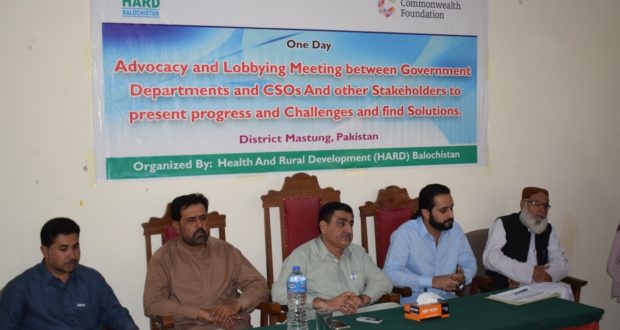 MASTUNG:  Mr Habib Ur Rehman (Assistant Commissioner) termed women without Computerized National Identification Card (CNIC) deprived from their right to identity, right to vote and all their citizen rights that bestows them, the constitution of Pakistan. He assured that he would provide full support CSOs project that working for people welfare and strengthening democracy toward a prosperous and developed Pakistan. He made these comments while speaking from the advocacy consultation between Government departments and CSOs with the participants including representatives of CSOs, political parties, Government authorities, WPRCs and other activists here on Tuesday.

Heath And Rural Development (HARD) Balochistan with the collaboration of CSOs and the assistance Commonwealth Foundation organized an advocacy and lobbying meeting between CSOs and Government authorities including district administration, NADRA and Election Commission and other relevant departments at District Council Hall District Mastung.

In the meeting, the CSOs and project team of “Strengthening Women Participation in Governance Is Strengthening Democratic Pakistan” shared the project planned activities, progress on the previous activities and highlighted the key challenges particularly about women without CNICs, increasing CNIC fee, required criteria, documents and procedure of vote and CNICs registration, security matters, lake of NADRA centres and Mobile Registration Vans, voting education and etc. Where the CSOs, authorities and all other participants have detailed discussion on the challenges to ensure timely support for better implementation of upcoming activities.

Mr Adnan Khan (Chairman) IK foundation said that issues related to women CNICs registration is grave issue not only in Mastung but in the Balochistan province of Pakistan where every fourth eligible women voter is not on the electoral list as she doesnot have a CNIC.

Mr Adnan Khan from Youth Balochistan organization said that the majority of unregistered women come from rural and semi urban and marginalized sections of society whose participation in political processes is of utmost importance to bring them to mainstream.

Mr Zia Baloch from HARD Balochistan said that according to officially acknowledged statistics, there are 1.2 million missing women voters in Balochistan who have yet to be issued Computerized National Identity Cards (CNICs) that is a prerequisite for voter registration. Female population in Balochistan is just eight percent less than male population whereas the number of women voters is 18.4% less than male voters. We all must play our role together for reducing this gender gap in Pakistan’s democratic processes to bring women equal participation and representation in politics to show the world that Pakistan contributing in a better way to achieve the SDGs 2030.

Miss Hameeda from HARD Balochistan requested NADRA and ECP and other authorities to increase no of MRVs and NADRA centres, reduce fees and required documents as well as expedite their support to project in registering women CNICs and votes.

Mr Akhtar Mohammad (Assistant Director) NADRA said that there are countless barriers in the way of women getting CNICs including limited resources with NADRA and mainly lack of awareness among women and their men which deprived women from their all basic rights. We have observed men and women do not have knowledge on importance of CNICs and politics, refrain to give capturing women picture even not interested in casting vote and politics. He called upon CSOs and political parties to raise awareness among people manly women about CNICs while highlighting in women CNICs registration. In the last appreciated efforts of HARD and allies and ensured that he will advocate and convince high authorities in increasing MRVs, NADRA registration Centers, reducing the fee especially for women and other required formalities to obtain CNIC.

Mr Tahir Khan DO ECP appreciated CSOs mobilization and advocacy efforts among women, their male, political parties and other stakeholders on importance of women civic and political rights, importance and procedure CNICs and voting registration which is really empowering women. He assured the civil society organizations of his full support in all activities related to voter registration and education.

Mr Buland Khan (Tehsil Dar from Police) urged that we all work hand in hand well that will produce better result in maximizing eligible women CNICs and voting registration and voting turn out.

Published in The Balochistan Point on April 23, 2019