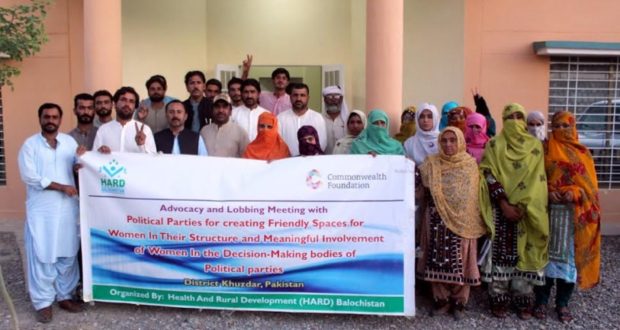 KHUZDAR: CSOs and other participants urged political parties to create women friendly spaces and bring them on key decision making positions in elected bodies of their political parties, here on the occasion of an advocacy and lobbying meeting held with political parties by Health And Rural Development (HARD) Balochistan with the assistance of Commonwealth Foundation.

Mr Idress (President of Eilum Citizen Board Org) said that in a patriarchal socio cultural society, women’s political participation has always been a low priority, except at the time of independence of Pakistan when they were involved on equal footing.

Mr Javed Baloch representing CSOs said that in Balochistan, women political participation is equal to none and the political parties and masses also perceive them as worth a guided vote at the time of election. If there are some women only in few political parties but their role within the party was confined to women wings to fill election campaign rallies, motivating other women voters and/or forerunners in agitation rallies. Their presence at the decision making elected bodies and political party’s level has been negligible.

Miss Fazeela Brahvi (Chairperson Informal District Assembly) and other women activists said that over the year, the participation of women in various political parties has also not led to their elevation in party hierarchy or political system. Women in politics are either from the elite classes or middle class both having different set of restrictions and advantages and comparatively later lacks decision-making at party and community level. For women in Balochistan, choice of joining political arena sometimes is a prioritization between family life and politics and those having not so favourable enabling environment, especially a political family background, prefer family life.

Mr Sultan Ahmed Shahwani said that we all must make joint efforts in creating an enabling environment for women in the world of politics and give them leading chances because women’s political leadership results in better outcomes for women and girls, as well as for society as a whole, and delivers progress in policy areas vital for economic growth and development, such as health, education and infrastructure. Even without these quantifiable dividends, the argument for women’s empowerment is irrefutable – democracy cannot be said to exist if half of the population is not wholly engaged equally in decision-making.

Mr Mohammad Waris Shaheen appreciated the new election act 2017 of ECP that consists of articles which say any constituency where the ratio of female voters remains less that 10 per cent will be declared null and void and re-election will be held. He said it must be increased 50% in order all the state institutions, political parties and CSOs expedite their efforts in helping women in CNICs and voting registration and ensure their full and meaningful participation in electoral and political processes. He urged the political parties to play their key role in creating women friendly spaces to ensure the equal representation of women in their parties for reducing a better and developed society.

The representatives including Mr Haider Zaman, Eid Mohammad, Mohammad Ashraf, Abdullah and others from different political parties shared their views in the meeting and most of them admitted the limitations and challenges of women role and their less participation in the politics and in their political party’s structure. Mr Haider Zaman from BNP urged we should ensure equal representation in our party structure and he committed that he will raise this issue in higher central committee meetings of his party. Mr Ghulam Qadir Chutta from BAP said that we the political parties must advocate and enhance women role in politics and bring women in leading role to inspire other women to come forward and join the politics. Furthermore, they assured who will struggle for creating friendly and violence free environment for women in their politics and will have meetings regarding to bring women on key decision makings positions in the upcoming elections of their parties.

Published in The Balochistan Point on September 24, 2019

2019-09-24
admin
Previous: Balochistan Takes the Lead in Rule of Law Reforms
Next: Shirkat Gah-Quetta conducts workshop on  “The Production of Meaning & Politics of Representation”