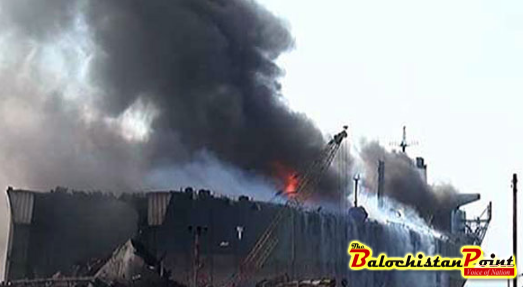 Quetta: The death toll from an explosion and fire at a Gadani ship-breaking yard last week has risen to 26, officials said on Sunday.

More than 57 others were wounded in the incident when a gas cylinder exploded and started a fire inside an oil tanker at the Gadani yard in the in Gadani district Lasbela.

A local government official, Zulfiqar Hashmi told media, “Six more wounded from the Gadani shipyard have died, so the new toll is now 26.”

He told that one person died at home after being discharged from hospital while five others expired in hospital.

A high-level committee formed by the Prime Minister Nawaz Sharif to investigate the causes of the fire held its first meeting in the port city of Karachi Saturday and said it would finalise a report within a week.

Industrial accidents are common in Pakistan, with workplaces often forgoing basic safety measures and equipment in the absence of legislation to protect labourers.

Published in The Balochistan Point on November 7, 2016