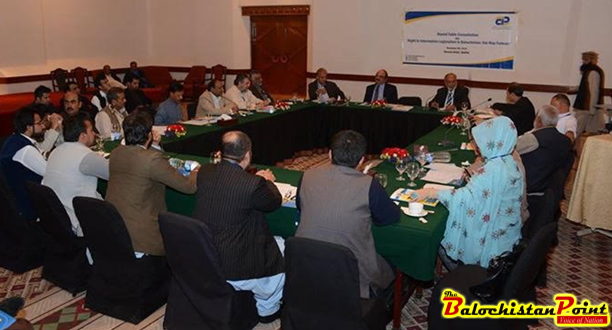 Quetta: Balochistan Freedom of Information Act 2005 is ineffective and needs to be repealed. It does not facilitate citizens and journalists in getting information from public bodies. There is a need for an effective right to information law for the province on the lines of those enacted in Punjab and Khyber Pakhtunkhwa. These views were expressed by right to information experts, journalists and information commissioners of Punjab and Khyber Pakhtunkhwa. in a round table consultation on ‘Right to Information Legislation in Balochistan: the Way Forward’ on 08 November, 2016 at Serena Hotel, Quetta.

Mr. Mukhtar suggested, “ This law is fundamentally flawed and cannot be improved and Balochistan government should enact a new law.”

Mr. Zummarak Achakzai, MPA said information is basic right of citizen and it is unfortunate that citizens do not have information about CPEC projects.

Published in The Balochistan Point on November 8, 2016