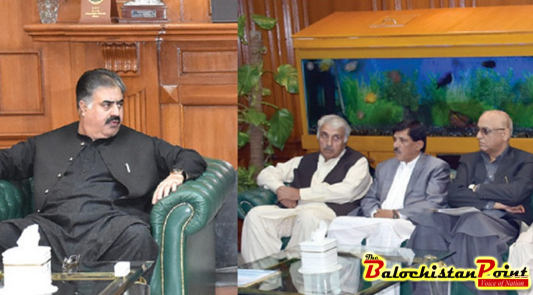 Quetta: Chairman of the Balochistan Public Service Commission and his colleagues refused to postpone the scheduled PCS and other BPSC examinations to accommodate a few candidates who are appearing M.A. and M. Sc examinations of University of Balochistan, Quetta.

This was finally decided in a meeting between the BPSC Chairman and the Chief Minister at the Chief Minister Secretariat where a number of Ministers, MPAs and officials, including Rahim Ziaratwal, Minister for Education assisted by his Secretaries for Secondary Education and Colleges, Mr. Umer Khan Babar and Haji Abdullah Jan, Leader of Opposition, Maulana Abdul Wasay, Zamruk Khan Achackzai, Deputy Leader of the opposition, Majeed Achakzai, Chairman of the Public Accounts Committee, Additional Chief Secretary Development, Mr. Daud Bareech wre also present.

The BPSC Chairman was assisted by a member of the Commission, Mr. Nasim Lehri.

Read also: PCS examinations will be held on schedule: Government of Balochistan

Published in The Balochistan Point on November 11, 2016

2016-11-12
admin
Previous: Experts highlight the need for new right to information law for Balochistan
Next: Hub: 62 killed, 95 injured in an explosion at the Shah Norani Shrine